Virat Kohli seemed surprised by Hardik Pandya's engagement news and congratulated the couple on embarking on a new journey. Hardik Pandya chose the first day of the New Year to offer the engagement ring to his Serbian girlfriend Natasa Stankovic. As soon as Hardik Pandya made the news public, by posting pictures and videos on his social media accounts, congratulatory messages started pouring in large numbers from across the globe, including his India teammates. Leading that race was none other than Indian skipper Virat Kohli, to whom Hardik's engagement news, like many fans, came as a "pleasant surprise". Replying to Hardik's post on Instagram, Kohli wrote, "Congratulations H. What a pleasant surprise. Wish you guys great times ahead. God bless". 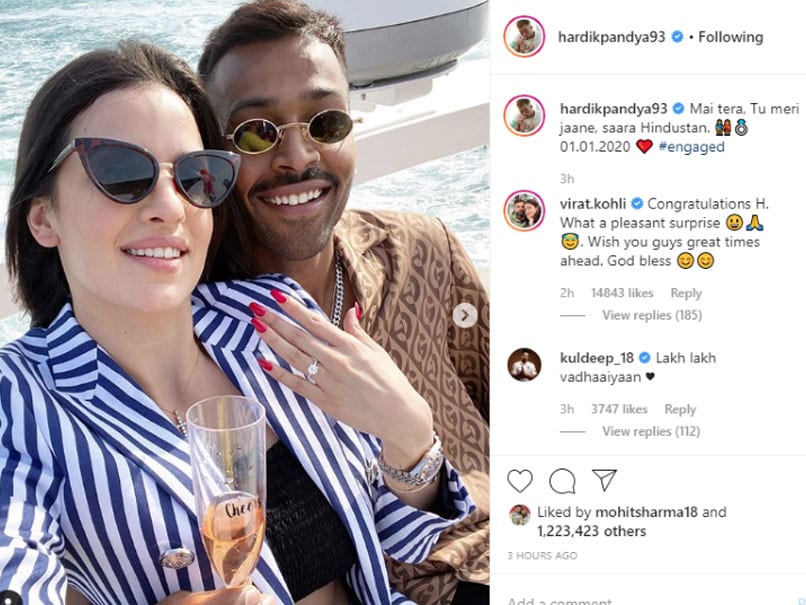 Before making his engagement news public, Hardik had posted a picture with his girlfriend -- now fiancee -- on Instagram. "Starting the year with my firework," Hardik had captioned the picture on Instagram.

On professional front, Hardik had a mixed last year as he underwent a surgery to treat his back problem and was unavailable for selection for the major part of the season.

Hardik last wore the Indian jersey in a Twenty 20 International game against South Africa way back in September 2019.

Since then, he has missed the Test series against South Africa and Bangladesh in addition to the limited overs series against the West Indies, which included three T20Is and as many ODIs.

Also, he hasn't been included in the Indian squad that will play three T20Is and three ODIs Against Sri Lanka and Australia respectively this month.

The selectors, however, have named him in the India A squad that will tour New Zealand ahead of senior team's visit.