When stumps were drawn finally, Mumbai had lost five of their top-order batsmen with 115 runs on board. At point of time the hosts were in deep trouble at 78 for five in the 44th over with Varun Aaron taking two wickets. 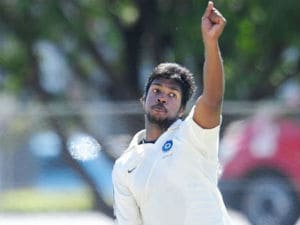 Having conceded the vital first innings lead to minnows Jharkhand, champions Mumbai had no other option but to fight for a draw which they did successfully after surviving anxious moments in their Ranji Trophy Group A game in Mumbai on Monday.

Placed at the bottom of table Jharkhand, overnight 176 for five in the second innings after taking a first innings lead of 86, delayed the declaration as they wanted Ishank Jaggi to complete his century after he was unbeaten on 51 on the third evening on Sunday.

The visitors finally declared at 278 for seven, Jaggi's contribution being 103 not out in 217 minutes, 41 minutes to lunch, but this delay calling off their their innings robbed Jharkhand bowlers of some valuable time with Mumbai needing a stiff target of 365 in 64 overs for a win.

When stumps were drawn finally, Mumbai had lost five of their top-order batsmen with 115 runs on board. At point of time the hosts were in deep trouble at 78 for five in the 44th over.

The extra pace of Varun Aaron, who grabbed four wickets in Mumbai's first innings, once again did the early damage.

The pacer sent back seasoned Wasim Jaffer (10) cheaply for the second time in the match and Sidesh Lad (4) to reduce the hosts to 28 for three after Shiv Shankar Rao trapped Sushant Marathe leg before as the opener made a pair of ducks.

Mumbai batsmen then fought with their backs to the wall with Aditya Tare (36) once again showing good application. Tare added 39 runs with Hiken Shah (21 not out in 166 minutes) and denied Jharkhand a wicket for 18 overs.

Though Tare later edged a sharply turning ball from rival captain and left-arm spinner Shahbaz Nadeem to slip fielder Saurabh Tiwary and was followed soon by home team skipper Abhishek Nayar, time ran out for the visitors to force what would have been a memorable victory over the 40-time winners of the title.

From 78 for five, left-hander Shah and Suryakumar Yadav (31 not out in 52 minutes) kept the rival bowlers at bay till play was called off after the eighth mandatory over. For Jharkhand, Aaron and Nadeem secured two wickets apiece.

Jharkhand, already out of contention for a place in the knock-out phase, secured three points to boost their tally to six from as many games.

Mumbai gained a solitary point that took their tally to 20 from the same number of games and helped them maintain their lead in the league table. Brief scores: