Resuming on 271 for eight, Haryana could add just five runs to their overnight total, with Ankit Rajpoot finishing with impressive figures of six for 68. 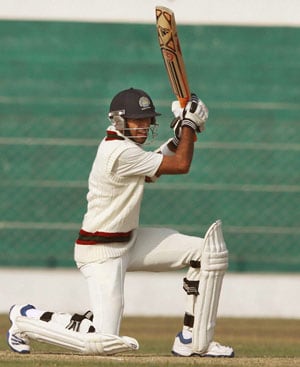 Senior pros Suresh Raina and Mohammad Kaif failed but Uttar Pradesh rode on their youngsters to regain some lost ground after conceding the first-innings lead to Haryana in their Group B Ranji Trophy match on Monday. (In pic, Rahul Dewan from Haryana)

After conceding a crucial 49-run lead to Haryana who were bowled out for 276 in their first innings, the hosts reached 217 for four at stumps on the penultimate day at the Dr Akhilesh Das Stadium.

Resuming on 271 for eight, Haryana could add just five runs to their overnight total, with Ankit Rajpoot finishing with impressive figures of six for 68.

The first-innings lead was largely possible due to the efforts of Rahul Dewan and Joginder Sharma who made 93 and 65 respectively yesterday.

In Uttar Pradesh's second innings, 23-year-old opener Tanmay Srivastava made 73 before being bowled by Mohit Sharma, who also took the wicket of Mukul Dagar.

24-year-old wicketkeeper-batsman Ekalvya Dwivedi was unbeaten 51 while Parvinder Singh was giving him company on 45 when the stumps were drawn.

Comments
Topics mentioned in this article
Cricket Mohammad Kaif Bhuvneshwar Kumar UP Arish Alam BAR Suresh Raina Joginder Sharma Nick Compton HAR Rahul Dewan
Get the latest Cricket news, check out the India cricket schedule, Cricket live score . Like us on Facebook or follow us on Twitter for more sports updates. You can also download the NDTV Cricket app for Android or iOS.