Umar Gul, who has struggled to find a permanent place in the Pakistan team after undergoing a knee operation in Melbourne last year, was ignored by the selectors for the series against Australia and New Zealand. 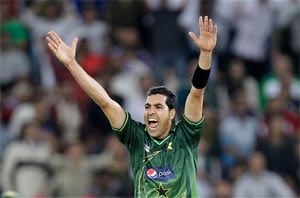 Handing Umar Gul a chance to make a comeback to the national team before the World Cup, the selector have named the seasoned pace bowler in Pakistan A team, which will take on Afghanistan A in a Twenty20 match in Islamabad on Saturday.

Gul, who has struggled to find a permanent place in the Pakistan team after undergoing a knee operation in Melbourne last year, was ignored by the selectors for the series against Australia and New Zealand.

"The inclusion of Gul is part of the selection panel's strategy of slowly bringing him back into international cricket," chief selector Moin Khan said.

"Umar is an experienced bowler who has recently struggled with a knee injury. But his 23 wickets and 102 overs in the ongoing Quaid-e-Azam Trophy is an indication that he is getting up to speed in terms of being match-fit as well as wicket-taking form," Khan added.

Gul, 30, who has taken 163 Test, 173 ODI and 80 T20 wickets will join tall left-arm pacer, Muhammad Irfan in the match which also features some promising young players.

Gul suffered the knee injury during the tour of South Africa in early 2013 and had to return home during the ODI series after which he had the surgery. But since then he has struggled for fitness, playing no Tests and only a handful of ODI and T20 matches for Pakistan.

A reliable source said that the selectors were monitoring the performances of Gul and Irfan and also their fitness as both were likely to be called up for the limited over series against New Zealand to be played next month.

"Even the selectors know that the experience of Gul and the uncanny ability of Irfan to trouble batsmen with his bounce will be invaluable for Pakistan in Australia and New Zealand in the World Cup," the source said.

Comments
Topics mentioned in this article
Umar Gul Pakistan Cricket Team Cricket
Get the latest updates on T20 World Cup, check out the T20 World Cup Schedule and Live Score . Like us on Facebook or follow us on Twitter for more sports updates. You can also download the NDTV Cricket app for Android or iOS.