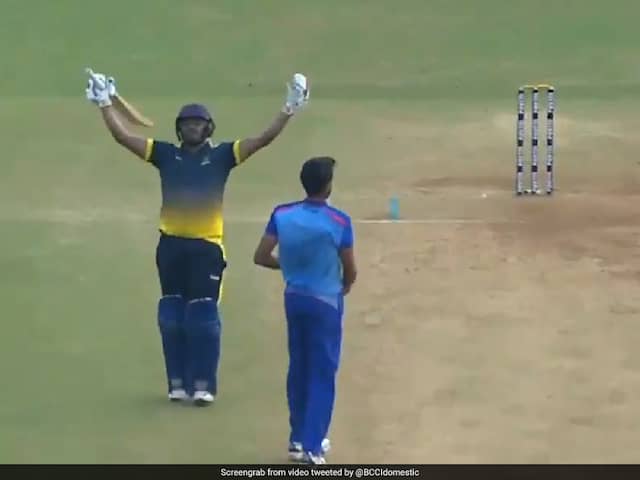 Meghalaya ended Mumbai's winning streak after they defeated the domestic giants by six wickets in the league match of Syed Mushtaq Ali trophy in Mumbai on Friday. After restricting the hosts to a below-par 157/6 at Wankhede Stadium, Meghalaya rode on half centuries by Ravi Bhamidipati (61 not out) and Sanjay Yadav (55) to chase the target with four balls to spare, despite a poor start. This is Mumbai's first loss in the tournament and the result is also seen as a huge upset in cricketing circles. Opting to bat first, Mumbai failed to capitalise on the flying start provided by openers Jay Bista (44 off 30 balls, 6x4, 1x6) and Aditya Tare (27 off 22 balls, 4x4), who added 73 runs for the first wicket.

But medium pacer Swarajeet Das (2-31) pegged back the hosts by dismissing both the openers in the ninth over.

Meghalaya started the chase on a poor note, as they lost their skipper Raj Biswa (0) in the first over.

Soon, theywere reeling at 41-3, with another opener Punit Bisht (23) and Swarajeet Das (0) back in the hut.

But Bhamidipati and Yadav had other plans, as their 92-run for the fourth wicket not only rebuilt the Meghalaya innings, but also took the game away from Mumbai.

Bhamidipati hit eight boundaries in his unbeaten 45 balls knock, while Yadav had six fours and two other hits over the fence.

Mumbai's key spinner Shams Mulani dismissed Yadav in the 16th over, but it was too little and too late.

Bhamidipati in company of Abhay Negi (10 not out) took the visitors home, leaving Mumbai stunned.

In the first game at Wankhede stadium, Haryana defeated Mizoram by seven wickets, as they chased the 96-run target in 9.4 overs.

Earlier, in the first game at Bandra-Kurla Complex, Bengal got better of their opponents Madhya Pradesh by six wickets, thanks to an unbeaten 65 by opener Shreevats Goswami.

Comments
Topics mentioned in this article
Suryakumar Yadav Shreyas Iyer Cricket
Get the latest Cricket news, check out the India cricket schedule, Cricket live score . Like us on Facebook or follow us on Twitter for more sports updates. You can also download the NDTV Cricket app for Android or iOS.