Syed Mushtaq Ali Trophy: Delhi wicket-keeper Anuj Rawat pulled off a one-handed stunner in Ishant Sharma's first over to get rid of Kerala's hero from their last game Mohammed Azharuddeen for a duck. 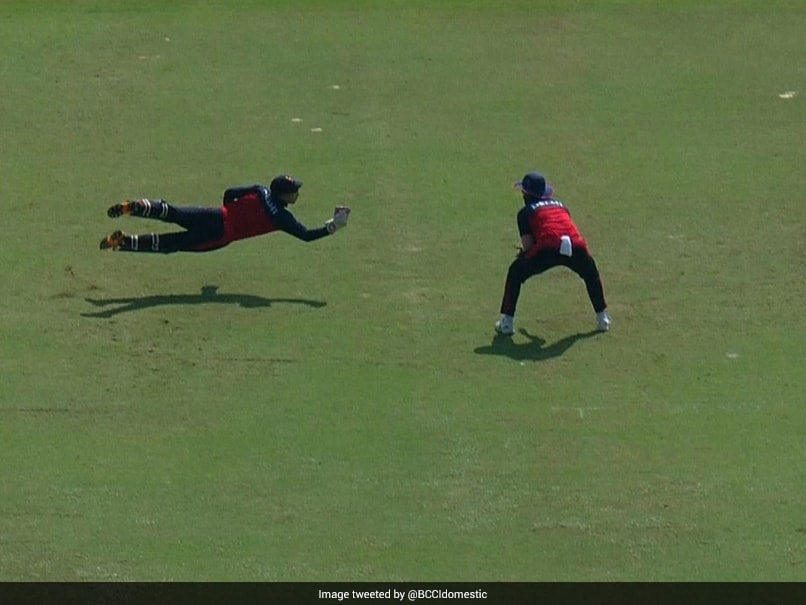 Anuj Rawat dived to his right to grab a stunning catch with one hand.© Twitter

Delhi wicket-keeper Anuj Rawat pulled off a one-handed stunner in Ishant Sharma's opening over to get rid of Kerala's hero from their last game Mohammed Azharuddeen for a duck during a Syed Mushtaq Ali Trophy match on Friday. Despite a brilliant start with the ball, Delhi suffered their first loss of the campaign as Kerala chased down the massive target of 213 runs with six balls left. Ishant bowled a full-length delivery that moved just a tad bit away from the right-handed batsman. Azharuddeen went for a drive but only managed an outside edge that flew behind the stumps, bringing the wicket-keeper in action. Anuj Rawat, who scored unbeaten 27 run off just 10 balls, dived to his right to grab a stunning catch with one hand.

Delhi skipper Shikhar Dhawan smashed a half-century (77 off 48 balls) with the help of seven fours and three mighty hits over the fence.

All-rounder Lalit Yadav's blistering fifty (52 not out off 25 balls) and Anuj Rawat's cameo propelled Delhi to a massive total of 212/4 from their 20 overs.

Chasing the mammoth total, Kerala got off to a poor start as they lost opener Azharuddeen in the first over of the innings bowled by Ishant Sharma.

Keralaskipper Sanju Samson also departed cheaply in the fourth over after scoring 16 off 10 deliveries, while Sachin Babay got out after scoring a brisk 22 off 11 balls.

However, from there on experienced opener Robin Uthappa and Vishnu Vinod took control of the innings and stitched a match-winning partnership, adding 133 runs for the fourth wicket.

Apart from Kerala's superb batting, Delhi fielders dropped a couple of crucial catches that cost them dearly in the end.

Ishant Sharma Cricket
Get the latest updates on India vs Australia and check out  Schedule, Results and Live Score. Like us on Facebook or follow us on Twitter for more sports updates. You can also download the NDTV Cricket app for Android or iOS.