KB Arun Karthik led Tamil Nadu into their second successive Syed Mushtaq Ali Trophy final with an unbeaten 89-run knock that shaped their seven-wicket victory over Rajasthan in the first semi-final on Friday. 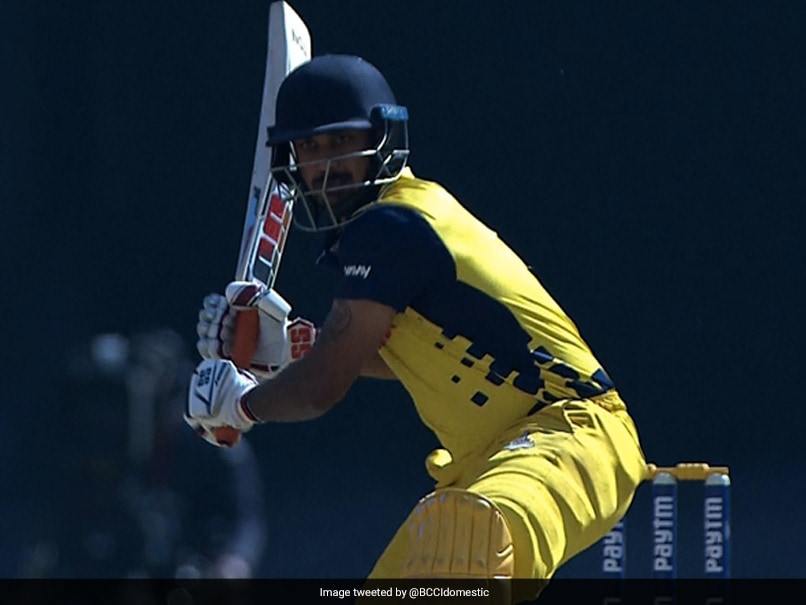 KB Arun Karthik led Tamil Naduinto their second successive Syed Mushtaq Ali Trophy final with an unbeaten 89-run knock that shaped their seven-wicket victory over Rajasthan in the first semi-final on Friday. Arun Karthik's 89-run partnership with skipper Dinesh Karthik(26 not out) meant that Tamil Nadu overhauled the 155-run target with eight balls to spare. TN had lost the summit clash by just one run to Karnataka, last year. Rajasthan's decision to bat first at the Sardar Patel stadium seem to be working well but Tamil Nadu restricted them to a sub-par 154 for nine despite skipper Ashok Menaria's 51 off 32 balls.

Aditya Garhwal (29) took on medium pacer Aswin Crist, striking successive boundaries in the third over but he was unable to convert his start and perished in the fifth over.

Menaria launched into Crist, hammering three boundaries and a six, in the sixth over. The left-handed Menaria, whose knock was laced with five fours and two sixes, took on the Tamil Nadu bowlers as he and Arjit Gupta (45 off 35 balls) raised a 83-run third wicket stand.

Tamil Nadu, initially, were sloppy in the field and dropped three catches, including one of Menaria.

Rajasthan then suffered a collapse as the southern side stormed back into the contest by picking regular wickets and pacer M Mohammed (4/24) doing bulk of the damage.

In the final five overs, Rajasthan lost five wickets and added only 24 runs as Tamil Nadu bowlers stamped their authority.

Tamil Nadu were in spot of bother at 17/2 after Aparajith (2) was caught in the slip cordon.

But a determined Narayan Jagadeesan (28) and Arun Karthik came to the rescue as they put together 52 runs for the third wicket and took the game away from Rajasthan.

Young leggie Ravi Bishnoi (1/32) tried to bring Rajasthan back into the game by removing Jagadeesan, who holed out in the deep, as TN lost its third wicket on 69.

But then Tamil Nadu cruised as skipper Dinesh Karthik joined Arun and the duo tore apart the Rajasthan attack.

Arun Karthik hammered nine boundaries and three sixes, in his match-winning knock and fittingly finished the game with a boundary.

Dinesh Karthik Mahipal Lomror Ravi Bishnoi Cricket
Get the latest updates on IPL Auction 2023 and check out  IPL 2023 and Live Cricket Score. Like us on Facebook or follow us on Twitter for more sports updates. You can also download the NDTV Cricket app for Android or iOS.