Dinesh Karthik joined the Bernie Sanders meme fest, sharing his own version of the meme. 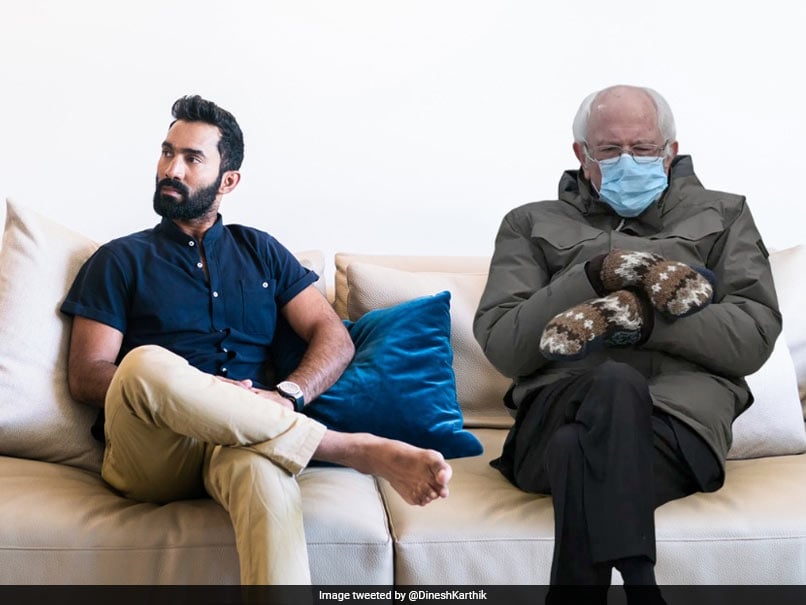 Dinesh Karthik has been most recently seen in the ongoing edition of the Syed Mushtaq Ali Trophy.© Twitter

Team India cricketer Dinesh Karthik took to social media on Wednesday, to join the Bernie Sanders meme fest. Karthik posted his own version of the meme which gained popularity, after the US senator arrived at the presidential inauguration wearing patterned mittens and a heavy winter jacket. The 35-year-old can be seen sitting on the sofa, with Sanders morphed right next to him wearing a mask and the same outfit as seen in the meme. "After going all over the world, look who finally dropped in!#BernieSanders," read the caption on the tweet.

After going all over the world, look who finally dropped in! #BernieSanders pic.twitter.com/zWWDEaoWYj

Karthik has been most recently seen in the ongoing edition of the Syed Mushtaq Ali Trophy, where he is representing Tamil Nadu. The wicket-keeper batsman is the captain of the team, which has reached the semi-finals of the tournament following a triumph against Himachal Pradesh in the second quarter-final.

Tamil Nadu won the toss and opted to bowl, restricting their opponents to 135 for 9 in 20 overs. Skipper Rishi Dhawan was the highest run-scorer for Himachal Pradesh, accumulating 35 off 26 deliveries. Dhawan scored two boundaries and a six during his knock. Sonu Yadav was the pick of the bowlers, accounting for three wickets.

In response, Tamil Nadu were reduced to 66/5 in 12.3 overs, following a fine spell by Vaibhav Arora. However, a partnership between Baba Aparajith (52*) and Shahrukh Khan (40*) helped the team chase down the target in 17.5 overs.

Karthik has been retained by the Kolkata Knight Riders (KKR) for the upcoming edition of the Indian Premier League (IPL).

Dinesh Karthik Shahrukh Khan Baba Aparajith Cricket
Get the latest updates on India vs Australia and check out  Schedule, Results and Live Score. Like us on Facebook or follow us on Twitter for more sports updates. You can also download the NDTV Cricket app for Android or iOS.