Karnataka's Abhimanyu Mithun finished his spell with figures of five for 39 during Syed Mushtaq Ali trophy semi-final against Haryana. 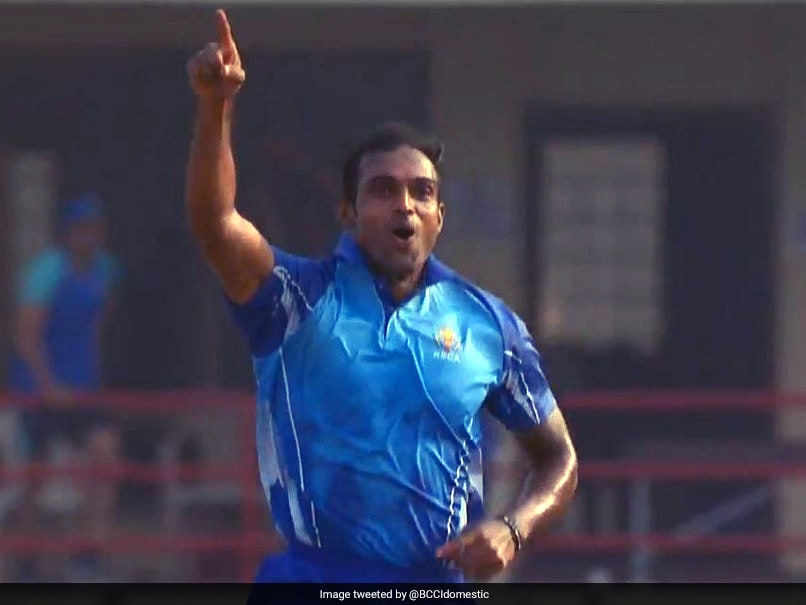 Abhimanyu Mithun, fast bowler from Karnataka, showed his prowess with the ball as he bagged five wickets in an over against Haryana in the Syed Mushtaq Ali Trophy semi-final on Friday. Abhimanyu Mithun, bowling the 20th over of the innings, removed Himanshu Rana, Rahul Tewatia, Sumit Kumar and Haryana's skipper Amit Mishra successively to claim four wickets in four deliveries. The 30-year-old then managed to find the edge of Jayant Yadav's bat on the final ball of the innings as KL Rahul completed a simple catch behind the stumps to complete an eventful over for Abhimanyu Mithun.

In the match, Karnataka won the toss and opted to bowl. Chaitanya Bishnoi and Harshal Patel gave Haryana a flying start, scoring 64 runs in the first six over.

Shreyas Gopal provided the first breakthrough for Karnataka as he outfoxed Harshal Patel. Gopal again struck in his next over to trap Shivam Chauhan right in front of the stumps.

Himanshu Rana and Rahul Tewatia stitched together an 80-run stand for the fourth wicket. Haryana were looking set for a score more than 200 but Mithun's last over heroics helped Karnataka to keep the opposition to just 194.

Karnataka, who won the Vijay Hazare trophy last month, needed 195 runs to book a place in the finals of Syed Mushtaq Ali Trophy.

KL Rahul and Devdutt Padikkal scored half-centuries as Karnataka chased down the target with 5 overs to spare.

Abhimanyu Mithun last month had become the first bowler from Karnataka to take a hat-trick in the domestic 50-over cricket tournament.

Harshal Patel Cricket
Get the latest updates on ICC T20 Worldcup 2022, check out the Schedule and Live Score. Like us on Facebook or follow us on Twitter for more sports updates. You can also download the NDTV Cricket app for Android or iOS.