Steve Smith Hits 91 Not Out As Australia Beat New Zealand

It was another fine knock from Steve Smith who made his return to Australian colours this week from a year-long ban for ball-tampering. 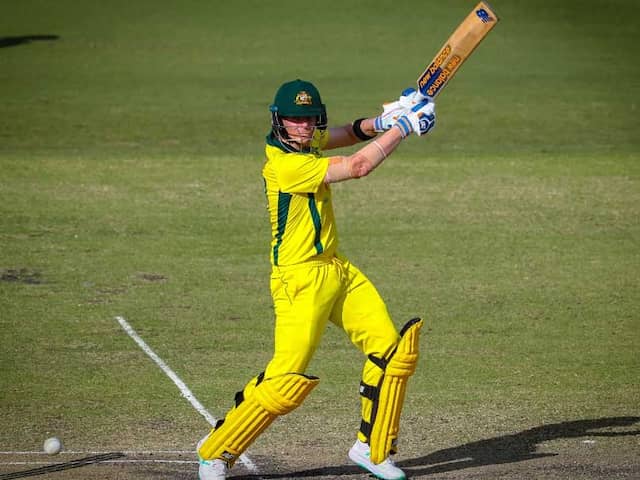 Steve Smith plundered an unbeaten 91 and Glenn Maxwell hit 70 Friday before bad light stopped play, with Australia winning their final warm-up game before leaving for England to defend their World Cup title. They were handed victory by five wickets courtesy of the Duckworth/Lewis/Stern method after amassing 248 for five off 44 overs in reply to an under-strength New Zealand's 286 for nine from 50 overs. It was another fine knock from former skipper Steve Smith, batting at three, who made his return to Australian colours this week from a year-long ban for ball-tampering.

It followed his 89 not out in the second of the three-match series in Brisbane, which do not count as full internationals, on Wednesday.

But David Warner, who was in imperious touch during the Indian Premier League, flopped again in opening the innings, out for two to follow his duck and 39 in the series.

Like Smith, Maxwell has been in good touch, pounding 70 off 48 balls to go with the quick-fire 52 he made on Wednesday.

For New Zealand, the unheralded Will Young smashed his second century in a row, mastering a top-notch Australian attack led by Pat Cummins and Mitchell Starc.

The 26-year-old, who is uncapped and not part of New Zealand's World Cup squad, followed up a classy 130 on Wednesday by reaching another ton with a pull for six over mid-wicket.

He eventually fell to Marcus Stoinis for 111.

While this week's series was unofficial, his tally of 301 is just shy of the New Zealand record for a three-match one-day series, held by Martin Guptill who scored 330 against England in 2013.

Opener George Worker chipped in with 59, while Cummins was the best of the bowlers, taking 4-32 off eight overs.

Cummins and Starc, who took one wicket, were playing together for the first time in three months as the latter returns from injury.

Australia won the series 2-1, claiming a close opening game at Allan Border Field by one wicket while their trans-Tasman rivals bounced back to easily take the second by seven wickets.

Australia play two more warm-up matches at Southampton, against England and Sri Lanka, later this month before opening their World Cup campaign against Afghanistan in Bristol on June 1.