Pakistan might have to wait further for the revival of international cricket back home as their series against Sri Lanka later this year is still awaiting clearances. 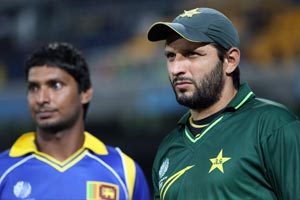 Pakistan might have to wait further for the revival of international cricket back home as their series against Sri Lanka later this year is still awaiting clearances.

"We are happy to go but we need clearance from our government agencies which is awaited," ESPNSTAR.com quoted Sri Lanka Cricket (SLC) honorary secretary Nishantha Ranatunga as saying.

The Sri Lankan board have agreed to play in Pakistan after their team bus was attacked in Lahore in March 2009. Since then, the Pakistan Cricket Board (PCB) is trying hard to bring international teams for bilateral series.

Nishantha, while recalling that unfortunate incident, said they would be happy to send the team if all the necessary arrangements are made.

"It was a terrible moment, but with help of the president and the government's support, we were able to get our players back with six-seven hours of the incident by a special flight.

"But such attacks are beyond anybody's control but at the end of the day, players, officials and spectators need to be safe. We can't compromise on their safety."

On touring the terror-affected country, Nishanth said: "Look, we need guarantees and assurances from the law enforcement authorities. Then the players need to be consulted as well. Plus, the ICC needs to be convinced. So it's a process."

"PCB has been quite supportive and that's the way it should be if we have to promote cricket in the sub-continent and build relationships. But we have to abide by certain permissions from the government."

Comments
Topics mentioned in this article
New Zealand Cricket Team Pakistan Cricket Team Sri Lanka Cricket Team Cricket Stuart Broad
Get the latest updates on ICC T20 Worldcup 2022 and CWG 2022 check out the Schedule, Live Score and Medals Tally. Like us on Facebook or follow us on Twitter for more sports updates. You can also download the NDTV Cricket app for Android or iOS.