Sri Lanka vs England: James Anderson said the "unusual" welcome with hazmat suits and disinfection sprays at the Mattala airport in Sri Lanka made the team feel safe. 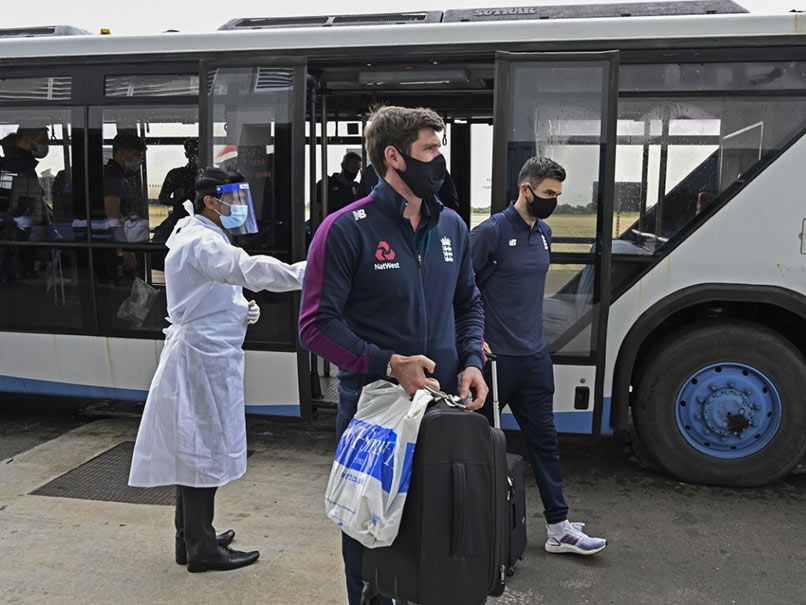 James Anderson said the past English summer has shown you can still play sport and not spread the virus.© AFP

Beginning a Test tour with hazmat suits, disinfection spray and isolation would knock many athletes for six, but England's cricketers are grateful for the cautious welcome laid on by their Sri Lankan hosts, fast bowler James Anderson said Monday. England arrived on the Indian Ocean island Sunday to resume a tour cancelled in the early days of the Covid-19 pandemic and will be hoping to repeat their 3-0 whitewash of Sri Lanka in 2018. At the airport, Joe Root's men were greeted by staff in hazmat suits who sprayed the team and their luggage with disinfectant before they were allowed into the terminal to take their second covid test in as many days.

"Yeah, it was pretty unusual," Anderson told an online press conference of the welcome.

"But I think from our point of view, we spoke about it after and it made us feel really safe."

The team had the small airport at Mattala all to themselves, as virtually no international flights are allowed into the country as it battles a new wave of infections.

After being sprayed and tested, the 23 England players went into a strict hotel quarantine in Hambantota in southern Sri Lanka ahead of the two Tests which will be played behind closed doors in Galle.

The first starts on January 14.

The sanitised welcome was particularly reassuring to England, who pulled out of a tour to South Africa last month over Covid fears.

"Obviously Sri Lanka with really low cases, they are obviously taking every precaution to make sure they (are) safe over here," Anderson said, speaking to reporters from his hotel room.

He and his teammates must remain in total isolation and survive off room service food until they get tested Tuesday. They will then be allowed to train in a bubble if they return a negative Covid-19 test.

"In the current situation, I think it's the only way to go about things," Anderson said, adding that top athletes had to take coronavirus restrictions in their stride to ensure prevailed over the pandemic.

"I think, we know from the summer that you can still play sport and not spread the virus," he added.

"But there are restrictions on you when you do that, so we're totally understandable of the current situation, and we're just going to try and get on with it best we can."

England have brought six slow bowlers for the tour after their spinners proved key in their 3-0 series win in 2018.

Dom Bess, Jack Leach and Moeen Ali are in the 16-member squad while Mason Crane, Matt Parkinson and Amar Virdi are in the seven reserves.

But Anderson, who last year became the first fast bowler to reach 600 Test wickets, said it is not all "doom and gloom" for the quicks.

"Going by the last couple of tours, spin has been a huge part of our success here. The wickets have really suited the spinners." Anderson said.

"We have got a good pace attack here. You are still in the game, you still have opportunities. There is reverse swing, the new ball does swing as well.

"Certainly I have had some success at Galle before and I know some of the other seamers have as well. So it's not all doom and gloom for the seamers."

Meanwhile Anderson also backed cricket's inclusion in the Olympics, saying there is no reason the Twenty20 format cannot make the cut at future Games.

James Anderson Cricket
Get the latest updates on India vs South Africa and check out  Schedule, Results and Live Score. Like us on Facebook or follow us on Twitter for more sports updates. You can also download the NDTV Cricket app for Android or iOS.