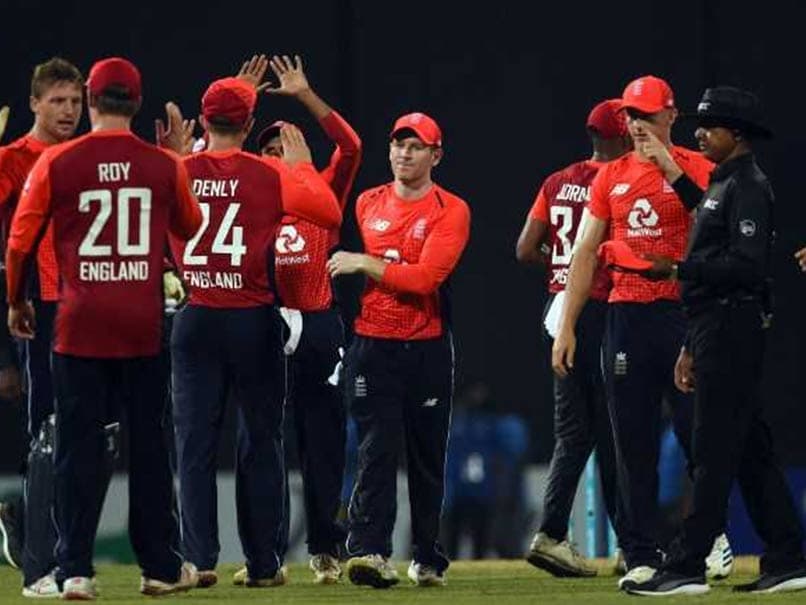 England beat Sri Lanka by 30 runs in the one-off T20I at the R.Premadasa Stadium in Colombo.© AFP

Sri Lanka used ambidextrous bowler Kamindu Mendis in a bid to bamboozle but brutal batting by Jason Roy saw England to victory in their one-off T20 international on Saturday. Roy hit 69 off 36 balls and Joe Denly, returning to the England side after eight years, opened the bowling with his leg spin and took four wickets as the tourists won by 30 runs. Captain Eoin Morgan hailed Denly's "outstanding" comeback. England made 187 for seven off their 20 overs. Sri Lanka, who won the toss, lost their final wicket off the last ball as they reached 157 in an increasingly desperate chase.

The 20-year-old Mendis switched his left arm orthodox spin and right arm off-spin for three overs against England's big hitters but gave away 27 runs before he was withdrawn. His 24 off 14 balls batting showed more promise.

Roy and his partners clattered England to 50 runs off 29 balls before Sri Lanka's veterans started to limit the damage.

With rain showers predicted, England knew they had to score fast to put pressure on the home side. Roy showed his intent smashing the second ball off Lasith Malinga for six.

He had one run out mixup that cost the wicket of captain Eoin Morgan and was dropped four times by Sri Lankan fielders. But his innings -- with six sixes and four fours -- was decisive, along with Moeen Ali's 27 off 11 balls and Ben Stokes' 26.

Denly also contributed 20 and earned the man-of-the-match award. He opened the bowling and took a wicket in each of his first two overs. He also claimed the final two Sri Lankan scalps, including Perera.

"I am delighted to be back," said Denly who has had a stellar year with county side Kent. "There were a few nerves, but more excitement."

Denly said he still had hopes of getting a place in the side to play three Tests in Sri Lanka in November. "Hopefully I can put my name in the hat."

Perera's six sixes gave the score an air of respectability. But the captain acknowledged the poor decisions and attitude in the side who hammered England in the final one day game even though they lost the series 3-1.

"If we hadn't lost wickets it could have been a different story," he said.

"In the last match we had good fielding, but there is no point making excuses. Normally Sri Lankans play spin well, but this series isn't working."

He added: "We need to get our plans better. But we are going in the right direction."

The first Test match starts in Galle on November 5.

Eoin Morgan Kamindu Mendis Sri Lanka vs England, One-off T20I Cricket
Get the latest updates on IPL Auction 2023 and check out  IPL 2023 and Live Cricket Score. Like us on Facebook or follow us on Twitter for more sports updates. You can also download the NDTV Cricket app for Android or iOS.