The Lions have also won their past three ODIs at the Melbourne Cricket Ground, boosting their confidence ahead of the five-match series after the 3-0 battering they received from Michael Clarke's team in the recent Tests. 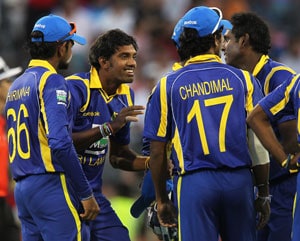 Sri Lanka are banking on the return of slinging paceman Lasith Malinga to give them a fresh start in the one-day series against Australia, starting in Melbourne on Friday.

The explosive Malinga, whose unusual "slingshot" action makes him difficult to face, was keenly missed by Sri Lanka in their three-Test mauling by the Australians as he concentrated on the shorter forms of the game.

In missing the Tests, he became one of the standout bowlers in Australia's Twenty20 Big Bash League with the Melbourne Stars.

Sri Lanka go into the series opener reinvigorated by the addition of Akila Dananjaya, Upul Tharanga and Ajantha Mendis along with Jeevan Mendis and Thisara Perera, who have been playing in the Big Bash League.

"I think it's going to be a fresh start because there are a few guys who will be joining us as well," all-rounder Angelo Mathews said.

"It's very disappointing the way we played in the Test matches but I think we need to get through that, flush it out of the system and concentrate on the ODIs.

"Lasith Malinga is joining us and we have got more fire in our bowling department.... I think he's the best bowler going around in world cricket at the moment in the Twenty20 format."

Sri Lanka will be encouraged by their ODI record in Australia, with four wins in seven matches last year, while they claimed their first-ever series win in Australia 2-1 in 2010.

The Lions have also won their past three ODIs at the Melbourne Cricket Ground, boosting their confidence ahead of the five-match series after the 3-0 battering they received from Michael Clarke's team in the recent Tests.

"We've got to concentrate on our cricket... whatever team Australia puts on the field that's up to them," coach Graham Ford said.

"But a couple of those names are real match-winners in their own right and it is a bit of a comfort knowing they're not going to be around.

"We tend to prefer the short formats of the game anyway. We've got some really skilful one-day players."

Only three rankings points separate fourth-placed Australia from fifth-placed Sri Lanka in the ODI rankings and the home side are going in with a much-changed squad and an eye on building towards the 2015 World Cup at home.

Australia T20 skipper George Bailey will lead the side in Clarke's absence as he strives to fully recover from a hamstring strain, while Brad Haddin takes over the wicketkeeping gloves from Wade.

But there was no place for senior batsman Mike Hussey, who played his 79th and last Test earlier this week.

Hughes said he was confident that Australia had the quality to cope with a Sri Lankan attack boasting Malinga and spin dangermen Ajantha Mendis and Rangana Herath.

"The experience is there through state cricket even though it's not there through international cricket," he said. "You've got to start somewhere."