Spinners Rangana Herath and Dilruwan Perera shared six wickets between them to help Sri Lanka take command of the first Test against a struggling Bangladesh on a rain-hit day three in Galle on Thursday. 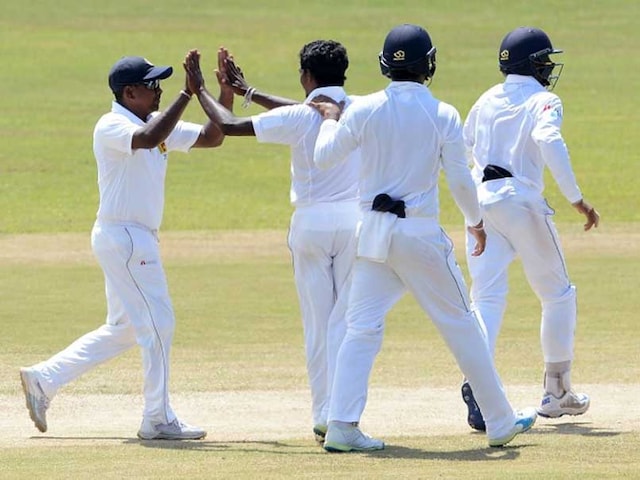 Spinners Rangana Herath and Dilruwan Perera shared six wickets between them to help Sri Lanka take command of the first Test against a struggling Bangladesh on a rain-hit day three in Galle on Thursday. The visitors, replying to Sri Lanka's first innings total of 494, were all out for 312 on the third day, trailing the hosts by a massive 182 runs. Herath took the final wicket just two balls into the last session before rain stopped play, finishing on 3-72. Off-break bowler Perera chipped in with 3-53.

Bangladesh skipper Mushfiqur Rahim made a dogged half-century and shared 106 runs for the seventh wicket with Mehedi Hasan, ensuring the visitors avoided the follow-on.

Herath bowled his Bangladesh counterpart Mushfiqur on the stroke of the tea break for 85 after the latter took their score past the 300 mark.

Perera took the wicket of Taskin Ahmed off the next ball with a successful review after his appeal for lbw was turned down by umpire Marais Erasmus.

Mushfiqur and Mehedi's efforts came after Bangladesh lost four wickets in the opening session that had threatened to derail their innings completely.

Fast bowler Suranga Lakmal took the key wicket of opening batsman Soumya Sarkar for 71 after Bangladesh resumed the day on 133 for two.

Shakib Al Hasan contributed 23 rapid runs off 19 balls before flicking a sliding delivery from Sandakan down the leg side where wicketkeeper Niroshan Dickwella completed the catch.

Mahmudullah (8) and wicketkeeper-batsman Liton Das (5) also threw their wickets away with loose shots.

Comments
Topics mentioned in this article
Sri Lanka Cricket Team Bangladesh Cricket Team Rangana Herath Dilruwan Perera Mushfiqur Rahim Galle International Stadium, Galle Cricket
Get the latest updates on IPL 2020, check out the IPL Schedule for 2020 and Indian Premier League (IPL) Cricket live score . Like us on Facebook or follow us on Twitter for more sports updates. You can also download the NDTV Cricket app for Android or iOS.