Dr Shuaib Manjra said new tests would be conducted on Saturday ahead of what is now planned as the opening encounter in the three-match series in Paarl on Sunday. 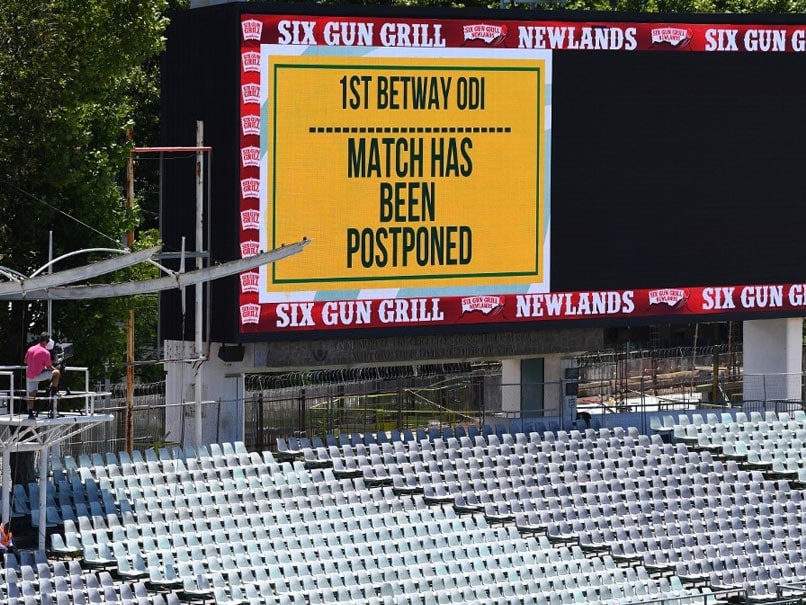 South Africa's team doctor said he was concerned about a possible breach of the bio-secure 'bubble'.© AFP

South Africa's team doctor said Friday he was concerned about a possible breach of the team's bio-secure 'bubble' after the first one-day international against England was postponed because a South African player tested positive for Covid-19. The postponement announcement was made just over an hour before Friday's day-night match was due to start at Newlands in Cape Town. Dr Shuaib Manjra said new tests would be conducted on Saturday ahead of what is now planned as the opening encounter in the three-match series in Paarl on Sunday.

There would be further tests after the planned second match in Cape Town on Monday ahead of the scheduled final match on Wednesday.

"We will re-test all our players and hotel staff on Saturday and await the results and determine a course of action," he said.

He did not speculate on whether the three matches would be able to go ahead if there were further positive tests.

"This test has surprised us because we had confidence in the bio-secure environment," said Dr Manjra.

He said the new infection had occurred since the players and staff went into what was regarded as a secure 'bubble' ahead of the series.

"There has been some kind of breach which we've investigated in great detail to try and determine where this happened, by speaking to the player and looking at security camera footage."

With both squads staying in the same hotel in Cape Town, near the Newlands ground where Friday's match was due to be played, Dr Manjra admitted the visiting camp had expressed concern.

"England is questioning the confidence they have in the bio-secure environment - and rightfully so. We respect that concern and have met with the England medical teams," he said.

Ashley Giles, managing director of England men's cricket, said the health and safety of his players and management was the number one priority.

"The England party will remain at is base in Cape Town on Friday and Saturday and we are hopeful that the three-match series will be played before we depart next Thursday," Giles said in a statement.

Dr Manjra dismissed what a team spokesperson said was a rumour that at least one South African player had left the hotel without authorisation.

"I can categorically state that no player would be able to leave the hotel environment," the doctor said. He said there was strict security, supervised by a police colonel: "It is impossible to leave except in an official vehicle with an official driver."

It was previously announced there had been two positive tests in the South African camp after they assembled on November 18. The infected players were placed in isolation at the team hotel and were said by team management to have recovered and to be available for the one-day series after missing a three-match Twenty20 series.

The tour by England is the South African team's first experience of being in a bio-secure bubble but England, who flew to South Africa on a chartered flight, successfully hosted teams from West Indies, Pakistan and Australia this year without any players being infected.

According to a statement from the two controlling bodies, the South African player's positive status emerged from tests conducted after his team's final scheduled practice on Thursday.