England beat South Africa comprehensively in the fourth Test to win the series 3-1. 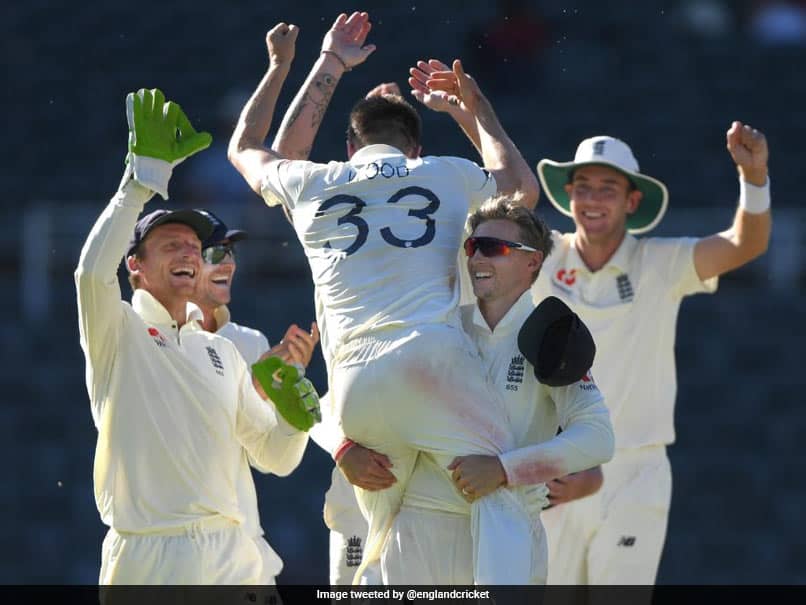 South Africa vs England: Mark Wood took nine wickets in the match and was also handy with the bat.© Twitter

Ben Stokes and Mark Wood made a double strike shortly before tea, breaking stubborn South African resistance and setting up a 191-run win for England on the fourth day of the fourth and final Test at the Wanderers Stadium on Monday. The win clinched a 3-1 series victory for England. Set to make a world record 466 to win, South Africa reached 181 for two before Stokes bowled home captain Faf du Plessis for 35. In the next over man-of-the-match Wood dismissed Rassie van der Dussen for 98. He went on to claim four for 54 to finish with match figures of nine for 100.

Quinton de Kock and Temba Bavuma shone briefly but South Africa were bowled out for 274.

Van der Dussen and Du Plessis batted for all but 13 minutes of an extended two-and-a-half hour afternoon session to give South Africa some hope, making the England bowlers toil on a hot afternoon.

But Stokes bowled a ball which hit a crack and kept low, deflecting off the toe of Du Plessis' bat into the stumps.

Van der Dussen looked set for a maiden Test century but in the next over he fell to Wood two short of the landmark.

He had batted impressively, hitting 15 fours and two sixes in a 133-ball innings but both he and Du Plessis were given a torrid time by Wood, bowling at express pace on a pitch where the bounce was gradually becoming more unpredictable.

With tea looming, England set a field which suggested a short-pitched barrage was likely. But Wood then bowled a full-length delivery which Van der Dussen drove awkwardly to short cover where Stuart Broad held a good diving catch.

It was the second wicket for Stokes -- both which came at crucial times shortly before an interval. His first victim was opening batsman Dean Elgar, who was caught and bowled playing an awkward pull shot in the penultimate over before lunch. Stokes finished with two for 47.

De Kock and Bavuma batted brightly in a fifth wicket stand of 48 before Broad bowled a vicious bouncer which Bavuma gloved to wicketkeeper Jos Buttler.

Broad had Dwaine Pretorius caught at fine leg in his next over and the rest followed.

Vernon Philander, playing in his last Test, struck a couple of beefy blows before falling to Wood who supplied the coup de grace, another lifting ball flicking Anrich Nortje's glove on its way through to Buttler down the legside.

Rassie van der Dussen Cricket
Get the latest updates on India vs Australia Series, check out the India vs Australia Schedule for 2020-21 and Ind vs Aus live score . Like us on Facebook or follow us on Twitter for more sports updates. You can also download the NDTV Cricket app for Android or iOS.