Harbhajan Singh played a pivotal role in the historic Test in Kolkata, where India bounced back from a follow-on to defeat Australia. 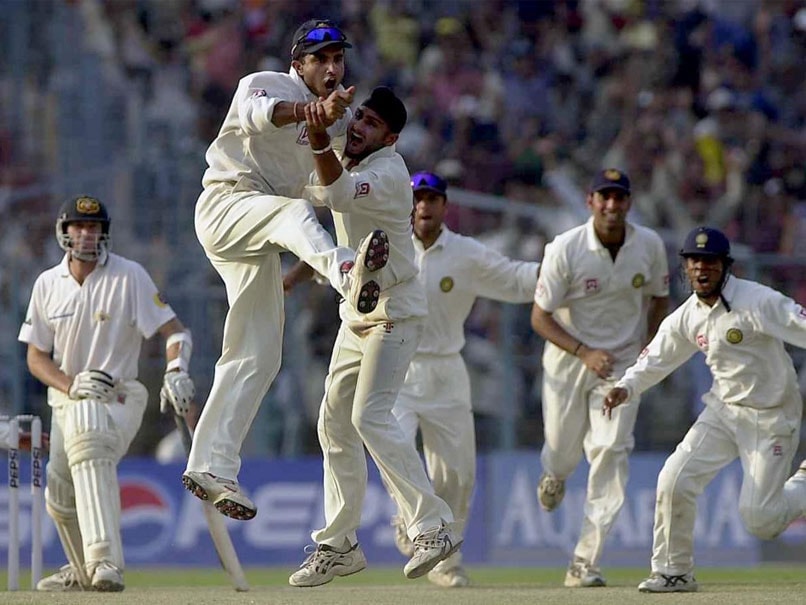 Sourav Ganguly celebrates with Harbhajan Singh after he took the final wicket at Eden Gardens in 2001.© AFP

The epic Test match between India and Australia at the Eden Gardens in March 2001 was filled with drama, nail-biting tension and some brilliant individual performances. While VVS Laxman's mammoth knock of 281 and his 376-run partnership with Rahul Dravid after Australia enforced the follow-on may be the first thing to come to mind when the clash is talked about, Harbhajan Singh's contribution with the ball was no less a match-winning effort. The off-spinner, who was recalled to the Test side at the time on then-captain Sourav Ganguly's insistence, took a hat-trick in Australia's first innings and finished the match with 13 wickets.

"They say it's love at first sight. And when I saw Harbhajan bowl at Eden, picking up 14 wickets it was love at first sight for a cricketer who I believed would go on to change things for Indian cricket," Sourav Ganguly said in a show on India Today.

"And 800 wickets after that, I am not surprised. He and Anil (Kumble) were the two best spinners India has ever had together in terms of the no of wickets and the impact that they have had on Test matches," the BCCI President said.

Anil Kumble missed that crucial series with an injury and Ganguly did not have a lot of options at the time against a rampant Australian side that was on a 15-match winning streak. The Steve Waugh-led side extended that run to 16 wins in the first match of the series in Mumbai.

"It was a new team with no Anil Kumble and Javagal Srinath two of the best bowlers of that time in Indian cricket," Ganguly said.

"Harbhajan Singh was a new commodity. I played 3 different spinners in 3 different Test matches. 1st one was Rahul Sanghvi, 2nd was Venkatapathy Raju, 3rd one was Neelesh Kulkarni. And my only wicket-taker was Harbhajan Singh because Anil Kumble was injured," he said.

Ganguly further underlined the importance of Anil Kumble in the side at the time.

"Anil Kumble not playing in India is a huge, huge difference for any team," the former India captain said.

"We worked hard before the series, John (Wright) was very important to us and Harbhajan bowled like a champion," Ganguly said.

Harbhajan Singh finished the three matches with 32 wickets and was adjudged the player of the series.

Comments
Topics mentioned in this article
Harbhajan Singh Sourav Ganguly Cricket
Get the latest updates on IPL 2021, check out the IPL 2021 Schedule and Indian Premier League Live Score . Like us on Facebook or follow us on Twitter for more sports updates. You can also download the NDTV Cricket app for Android or iOS.