Sourav Ganguly: From Prince Of Kolkata To King Of Indian Cricket

Sourav Ganguly taking over as President of the BCCI begins another chapter in what has been one of the stories of Indian cricket.

Sourav Ganguly has been appointed the President of the Board of Control for Cricket in India (BCCI) and on Wednesday, he took over the reins from acting President CK Khanna. Fondly known as the Prince of Kolkata, Sourav Ganguly has completed his journey from leading the Indian cricket team on the field to heading the administration of the sport in the country. While he took over as captain in trying times, he will start his tenure as BCCI head when Indian cricket is enjoying a golden period.

Ganguly had his first stint in administration with the Cricket Association of Bengal (CAB). He was part of the working committee for three years before taking over as Joint Secretary in 2014. He became the president of the CAB in 2015 and was re-elected for a second term in September this year.

Sourav Ganguly made his ODI debut for India in 1992 against the West Indies, when he managed to score just three runs. He was eventually dropped from the team, with his attitude also in question.

But not being one to give up, Ganguly piled on the runs in Ranji Trophy. His domestic form earned him a call-up for the national squad for India's tour of England in 1996, and things were never the same since.

Ganguly scored a magnificent century on his Test debut at Lord's and his 131 remains the highest score by a debutant on the hallowed ground. He followed up his sensational debut knock with another century in the next match in Trent Bridge, becoming only the third player in history to score centuries in their first two Test innings.

In 2000, Indian cricket found itself in turmoil amid a massive match-fixing scandal. Sachin Tendulkar, India's brightest star at the time, gave up captaincy after a troubled tenure. This is when Ganguly was asked to take the helm of the team. 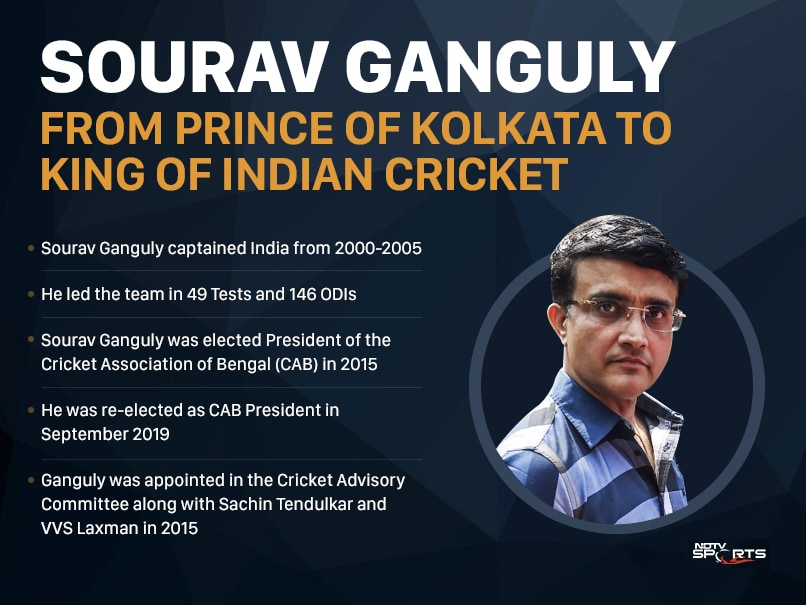 He led the team out of its darkest hour and rebuilt it to become a force to reckon with.

Under his leadership, India ended Australia's record 16-match winning streak in Tests in 2001.

The series involved the famous match at Eden Gardens, when India defeated Steve Waugh's side despite being forced to follow on.

Ganguly's aggressive start, along with Yuvraj Singh and Mohammed Kaif's heroics, propelled India to victory over England in the 2002 NatWest Series final, chasing down 326 in dramatic fashion. Images of Ganguly removing his jersey and swinging it around in celebration on the famous Lord's balcony have since been etched into cricketing folklore.

In 2003, he led India to their first World Cup final since 1983. India ended up losing to Australia, but Ganguly shone through the tournament, scoring 465 runs at an average of 58.12.

(Except for the headline, this story has not been edited by NDTV staff and is published from a syndicated feed.)
Comments
Topics mentioned in this article
Sourav Ganguly BCCI Cricket
Get the latest updates on ICC T20 Worldcup 2022, check out the Schedule and Live Score. Like us on Facebook or follow us on Twitter for more sports updates. You can also download the NDTV Cricket app for Android or iOS.