Virat Kohli will be away playing County cricket for Surrey when the Afghanistan Test is to be played. 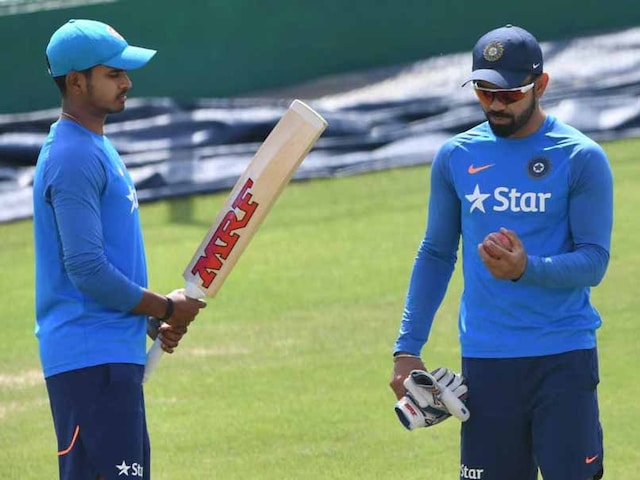 India captain Virat Kohli's maiden County journey might pave the way for Shreyas Iyer's entry into the Indian squad for the one-off Test against Afghanistan starting June 14. Kohli, who will be playing for Surrey for the entire month of June, will also miss the two T20 Internationals against Ireland in Dublin at the end of that month. While Ajinkya Rahane is set to lead the Indian team for the Test match, Rohit Sharma is likely to be in-charge during the Ireland leg with Kohli taking over at the start of July, a BCCI official told news agency PTI. The national selection committee meets to pick a host of squads on Tuesday. It is understood that barring Kohli, almost all the Test team regulars will be in action against Afghanistan.

Cheteshwar Pujara and Ishant Sharma are expected to come back from England after Yorkshire's away game against Surrey at the Oval from May 11-14. Yorkshire's next match is on June 20 against Hampshire.

"There was a bit of wrong communication in some sections of media. Pujara was always going to play the Test match against Afghanistan. Ditto for Ishant Sharma, who doesn't have a game for Sussex after his next match against Kent from May 11-14. Both are not playing any Royal London Cup matches during that phase," the BCCI official said.

As far as Kohli's replacement is concerned, the pattern of selection by the current panel, led by MSK Prasad, indicates that Iyer could be in the running for his Test debut against Afghanistan.

"We have like for like replacements. For Kohli, it has been Iyer. For Jadeja, its Axar Patel, for Hardik Pandya, it is Vijay Shankar. So you cannot miss the pattern," a selection committee member said.

The selectors had picked Iyer as Kohli's cover during the Dharamsala Test against Australia in 2017. Kohli had sustained a shoulder injury then. Iyer, however, didn't find a place in the playing XI as Kuldeep Yadav made his debut and had a successful outing.

However, with an aggregate of 3989 runs in 46 first-class matches at an average of 53.90 means that Iyer could find a place in the squad.

But with Murali Vijay, Shikhar Dhawan, KL Rahul, Pujara and skipper Rahane being certainties in the playing XI, Iyer will have to fight for his place along with Rohit Sharma, who has had a mediocre Test record so far.

The selectors will also announce the squads for the limited-overs leg of the UK tour along with the India 'A' tour of England, where a few Test specialists will be included for early acclimatisation.

For the two-match T20 series, most of the players of the Nidahas Trophy team are likely to be retained. Veteran Ambati Rayudu's current IPL form could also be up for discussion.

Youngsters Prithvi Shaw, Shubman Gill and Shivam Mavi are likely to find a place in the India A team coached by Rahul Dravid.

The India 'A' tour of England will begin with an ODI tri-series against England Lions (A team) and West Indies A, from June 22.

India A will play a four-day 'Test' against the 'Lions' from July 16-19 at Worcester apart from couple of three-day games against county sides.

Seven Test team regulars will be there in UK after completion of Afghanistan Test to get into the groove.

Comments
Topics mentioned in this article
India Cricket Team Shreyas Iyer Virat Kohli Cricket
Get the latest Cricket news, check out the India cricket schedule, Cricket live score . Like us on Facebook or follow us on Twitter for more sports updates. You can also download the NDTV Cricket app for Android or iOS.