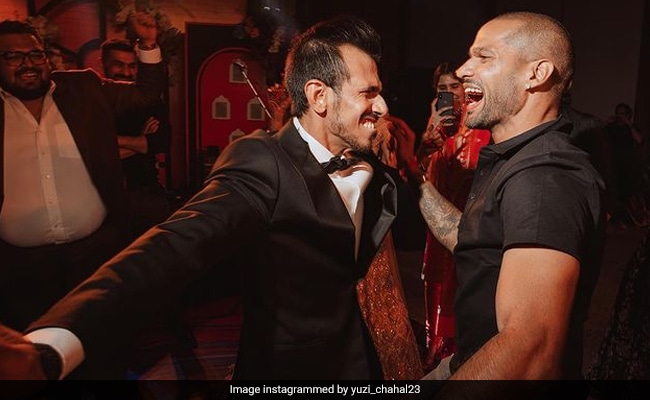 Shikhar Dhawan won over the internet with his camaraderie with Yuzvendra Chahal.© Instagram

Shikhar Dhawan, who is in Mumbai for the ongoing Syed Mushtaq Ali Trophy, took to Instagram to share a picture with Yuzvendra Chahal. In the picture, Dhawan can be seen holding Chahal in his arms. "How's that for spin @yuzi_chahal23," Dhawan captioned the post on Instagram. Soon after the left-hander posted the picture, fans, impressed with the duo's camaraderie, flooded the comments section. Both Dhawan and Chahal are currently representing Delhi and Haryana respectively at the Syed Mushtaq Ali Trophy.

Dhawan in his first game of the year, scored 23 runs off 23 deliveries against Mumbai as he led Delhito a comfortable 76-run victory in the domestic T20 competition at the Wankhede Stadium.

On the other hand, Chahal picked up two wickets to help Haryana restrict Andhra to a paltry total of 107 for the loss of six wickets. Haryana chased down the target with six wickets in hand and over four overs to spare.

Both Chahal and Dhawan featured in the limited-overs leg of India's ongoing tour of Australia.

India lost the three-match One-Day International (ODI) series 2-1. However, the visitors turned things around in the Twenty20 International series by claiming it 2-1.

Chahal, who came in as concussion substitute for Ravindra Jadejain the first T20I, bowled the visitors to victory in Canberra.

Dhawan scored 120 runs at an average of 40 in the ODIs while in the shortest format of the game, he smashed 81 run at a strike-rate of over 128.

Yuzvendra Chahal Cricket
Get the latest updates on SA vs IND 2021-22, check out the Schedule and Live Score . Like us on Facebook or follow us on Twitter for more sports updates. You can also download the NDTV Cricket app for Android or iOS.