Mitchell Starc was in the middle of the battle in a Sheffield Shield contest between Queensland and New South Wales. 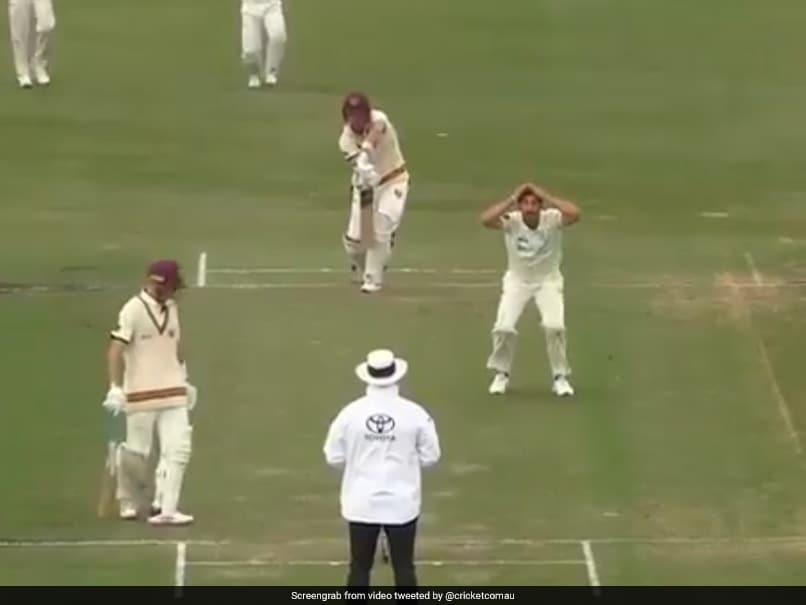 Mitchell Starc was left shell-shocked after the umpire turned down his two appeals in two balls.© Twitter

Australian fast bowler Mitchell Starcwas left shell-shocked after the on-field umpire turned down his appeal off the same batsman twice in a row. The incident happened during the opening day of a Sheffield Shield game between Queensland and New South Wales. During the fourth ball of the 83rd over of Queensland innings, fast bowler Jack Wildermuth was on strike after smashing a boundary on the previous delivery -- which was also the first ball he had faced. Starc charged in and bowled a short-pitch delivery right into the ribs of the batsman, which led to a huge caught behind appeal with keeper so convinced that he even started to celebrate.

However, the umpire didn't agree to the appeal, leaving the New South Wales players in a state of shock. After watching the replay, one of the commentators can also be heard saying "I think that it may be straight off the gloves", while his fellow commentator also agreed saying "There was a big deviation, I thought".

Sharing the video of the incident, the cricet.com.au tweeted: "Holy moly! Mitch Starc thought he'd removed Jack Wildermuth twice in two balls, but the umpire had other ideas! #SheffieldShield".

While what happened on the previous delivery was a hard pill to swallow, what transpired on the very next delivery left New South Wales even more baffled. Bowling from over the wicket, Starc followed up his short-pitch delivery with a full ball that struck Wildermuth right in front but the umpire was still unmoved.

At first the commentator said that it might have just pitched outside leg but upon watching the replay, he changed his mind and said: "That's hit him in line and everything looks pretty good. The height would be the only small issue but Starc can't believe it again as well".

While Starc thought he was unlucky on two balls in a row, Wildermuth didn't last long and departed on the same score of four runs after facing 13 balls. Mitchell Starc was pick of the bowlers for NSW as he returned with figures of 2/71 from his 20 overs, while Trent Copeland and Sean Abbott also picked up two wickets apiece as Queensland finished Day 1 play at 274/7, courtesy a century from Marnus Labuschagnewho scored 117 off 203 balls.

Mitchell Starc Jack Wildermuth Marnus Labuschagne Cricket
Get the latest updates on ICC T20 Worldcup 2022, check out the Schedule and Live Score. Like us on Facebook or follow us on Twitter for more sports updates. You can also download the NDTV Cricket app for Android or iOS.