A decision to call off play was made on Day 1 of the Sheffield Shield clash between Victoria and Western Australia after several batsmen were hit by rising deliveries. 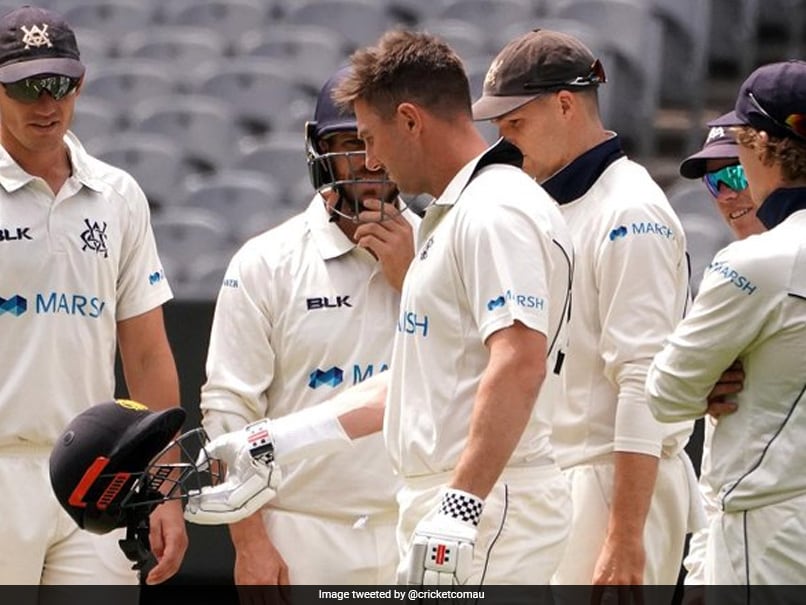 Shaun Marsh was among the batsmen to be hit multiple times by balls from fast bowlers that rose sharply.© Cricket Australia/Twitter

Play was suspended indefinitely Saturday during a domestic game due to a dangerous pitch at the Melbourne Cricket Ground, just weeks before it is due to host the traditional Boxing Day Test. A decision to call off play was made on day one of the Sheffield Shield clash between Victoria and Western Australia after several batsmen were hit by rising deliveries. "The Sheffield Shield match at the MCG has been suspended indefinitely," Cricket Australia tweeted. It said on its website that the move followed talks between the umpires and captains Peter Handscomb and Shaun Marsh.

Marsh was among the batsmen to be battered multiple times by balls from fast bowlers that rose sharply and unexpectedly on the lively pitch.

One that caught Marcus Stoinis in the ribs proved the final straw.

According to the official website, officials are hopeful of starting at 10am local time on Sunday's second day but it remains to be seen whether the wicket will be deemed to safe to play on.

Playing conditions for the Sheffield Shield dictate that if an abandoned game can't be rescheduled or relocated, points will be split between the two sides.

The match is the last one at the MCG before the second Test between Australia and New Zealand on December 26, giving cricket officials little time to rectify the issue.

In recent times the pitch has been criticised for being lifeless.

After the Boxing Day Test against England in 2017, the International Cricket Council rated it "poor" for offering little for the bowlers.

Melbourne Cricket Ground Cricket
Get the latest updates on ICC Women's Cricket World Cup 2022 and IPL 2022, check out the Schedule , Live Score and IPL Points Table. Like us on Facebook or follow us on Twitter for more sports updates. You can also download the NDTV Cricket app for Android or iOS.