Steve Smith bowled six overs in a Sheffield Shield match and picked up a wicket in bizarre fashion. 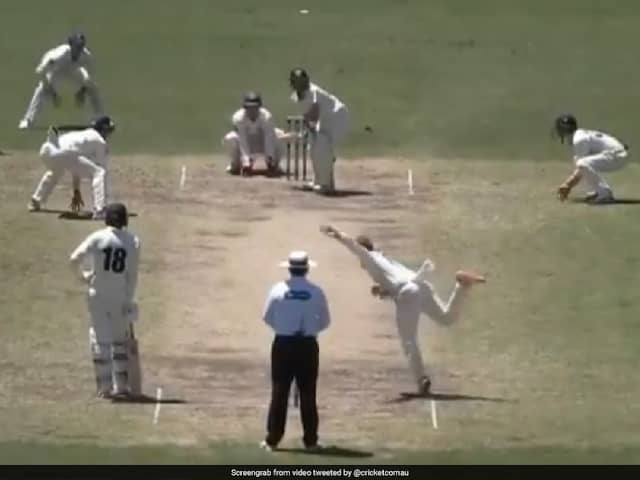 Steve Smith, who started his career as a leg spinner, dismissed an opposition batsman in "bizarre" fashion in a Sheffield Shield match against Western Australia. Steve Smith, after being introduced in the bowling attack by New South Wales captain Peter Nevil, bowled a full-length delivery and was rewarded with the wicket of lower-order batsman Josh Inglis in bizarre fashion. In a video posted by Cricket Australia on Twitter, Inglis can be seen going for a drive but the ball hits the fielder at silly point with Nick Larkin completing the catch on the rebound at short-leg.

Check out the bizarre dismissal here:

Steve Smith has a wicket... in bizarre (and lucky) circumstances!

It was Steve Smith's only wicket in the match. He bowled six overs in the game including two maidens and returned with figures of 1/10, at an impressive economy rate of 1.66.

Moreover, Smith also scored 103 runs in the first innings of the match, which his side New South Wales won by 223 runs.

The Sheffield Shield match will help Smith prepare for the upcoming Test series against Pakistan, starting from November 21 in Brisbane.

Smith is the top-ranked Test batsman in the world currently and has scored 6,973 runs in the longest format at a staggering average of 64.56. Interestingly, Smith also has 17 wickets in Test cricket.

Australia will host Pakistan in two-Test series, which ends on December 3, in Adelaide.