Bangladesh were dismissed for 144 in the 2nd innings to hand the West Indies their largest innings victory ever in a Test in the Caribbean. 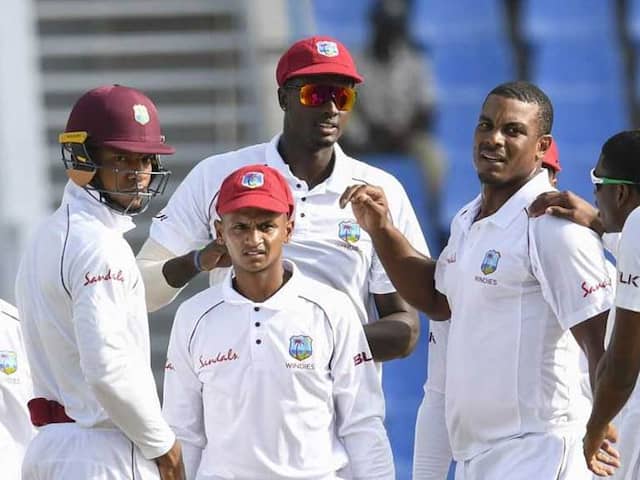 Shannon Gabriel finished with five for 77 as West Indies outclassed Bangladesh in the 1st Test.© AFP

Shannon Gabriel completed his third five-wicket haul in five innings as the West Indies completed a crushing victory over Bangladesh by an innings and 219 runs just before lunch on the third day of the first Test in Antigua on Friday. Wicketless in the demolition of the tourists for their lowest Test innings score, 43, on the opening morning, Gabriel started the wrecking job in the second innings with four wickets on the fourth evening. He then bowled Kamrul Islam when play resumed to finish with five for 77 as the Bangladeshis were dismissed for 144 to hand the home side their largest innings victory ever in a Test in the Caribbean.

However the morning's honours at the Sir Vivian Richards Stadium went to Nurul Islam.

The Bangladesh wicketkeeper-batsman blazed his way to 64, a maiden Test half-century in just his second match, and holding up the West Indies in the push for a victory that looked likely to be completed in a matter of minutes from the start of play.

Nurul reached his fifty off just 36 balls, the fastest-ever by a Bangladesh player in a Test away from home, and actually belted the otherwise dangerous Gabriel out of the attack by taking 16 runs off the fast bowler's 12th over.

It took Miguel Cummins to end the innings and the match with the lunch interval approaching as he had Nurul caught and bowled before scattering the stumps of Rubel Hossain in the next over to finally complete the triumph that looked a mere formality at the start of the day.

For Bangladesh captain Shakib al Hasan, it was a tough return to the helm in the traditional format of the game.

"We need to adapt better to these conditions," he admitted.

"It is not something we are familiar with but we have to spend the next five days getting ready for a similar situation when the next Test begins."

That second and final Test of the brief series begins July 12 in Kingston, Jamaica where another green, fast bowler-friendly track is expected to be prepared in keeping with the trend of playing surfaces starting with the drawn three-Test series against Sri Lanka.

"We were disappointed after losing the last Test of the series against Sri Lanka a week ago so that gave us some additional motivation," said West Indies captain Jason Holder in assessing his team's ability to rebound from defeat in Barbados in the finale to the Sri Lankan campaign.

"We needed to be a little more clinical in the second innings but I am looking now to us setting the tone again for the second Test."

Holder certainly meant business at the start of the day with the visitors resuming at 62 for six when, after delivering a wide first ball, he had Mahmudullah well caught low down at third slip for his third wicket of the innings.

A quick finish then looked certain when Gabriel breached Kamrul's defences to have Bangladesh tottering at 88 for eight.

But Nurul found determined support from Rubel in a surprising ninth-wicket partnership of 55 that left Holder and his teammates more than a little frustrated with the captain introducing spin for the first time in the match through Devendra Bishoo and Roston Chase without reward.

It took the re-introduction of Cummins into the attack to make the breakthrough with an effort that is likely to ensure his retention for the Sabina Park Test, especially with "Man of the Match" Kemar Roach under a fitness cloud after injury prevented him from bowling in the second innings.

"I am confident whenever I play against Bangladesh," said in Roach in reflecting on his devastating first innings performance when he finished with figures of five for eight, the five wickets coming in the space of 12 balls.

"There's a lot of assistance from the pitches but we have also been working hard on our games with bowling coach, Corey Collymore."

Roach started his Test career against the Bangladeshis in 2009, a series in the Caribbean which the visitors dominated at the expense of a home side severely depleted by the absence of the entire first-choice squad in the midst of a dispute with the West Indies Cricket Board.

Now though, the circumstances are very different and even if Roach is sidelined for the second Test, it will require a massive turnaround in form for Bangladesh to be competitive against these same opponents in a week's time.

Kemar Roach Cricket
Get the latest Cricket news, check out the India cricket schedule, Cricket live score . Like us on Facebook or follow us on Twitter for more sports updates. You can also download the NDTV Cricket app for Android or iOS.