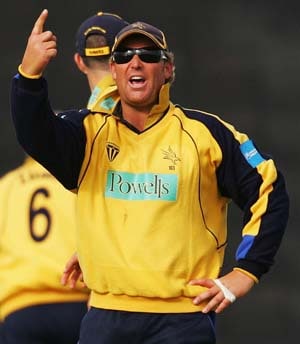 Australia great Shane Warne on Monday officially announced his retirement from the game, confirming he will not play with the Melbourne Stars in Australia's Big Bash League.

The leg-spin legend, who was inducted into the International Cricket Council Hall of Fame at Lord's on Friday, was instrumental in lifting the profile of the domestic Twenty20 league in its first two seasons and was one of its biggest drawcards.

But the 43-year-old said his time was finally up.

"I think the time is right for me to hang up my Big Bash boots -- juggling business, family and commentary commitments across two continents is not easy," said Warne.

"I've always loved the game but now it's time to observe. I wish Cameron (White) and rest of the lads all the best."

White will retake the captaincy.

Melbourne Stars head coach Greg Shipperd believes his team and the league are indebted to Warne for what he has helped them achieve during the first two seasons.

"It was always a privilege to share a dressing room with Shane," Shipperd said.

"His unique and exceptional skills will remain a symbol of excellence for generations to come."

Comments
Topics mentioned in this article
Cricket Luke Wright Isaac Vivian Alexander Richards Sreesanth Lasith Malinga Shane Warne Cameron White Marlon Samuels Rajasthan Royals SYS
Get the latest updates on India vs South Africa and check out  Schedule, Results and Live Score. Like us on Facebook or follow us on Twitter for more sports updates. You can also download the NDTV Cricket app for Android or iOS.