About 700 people took to the streets in Shakib Al Hasan's hometown of Magura, demanding the ICC revoke the ban. 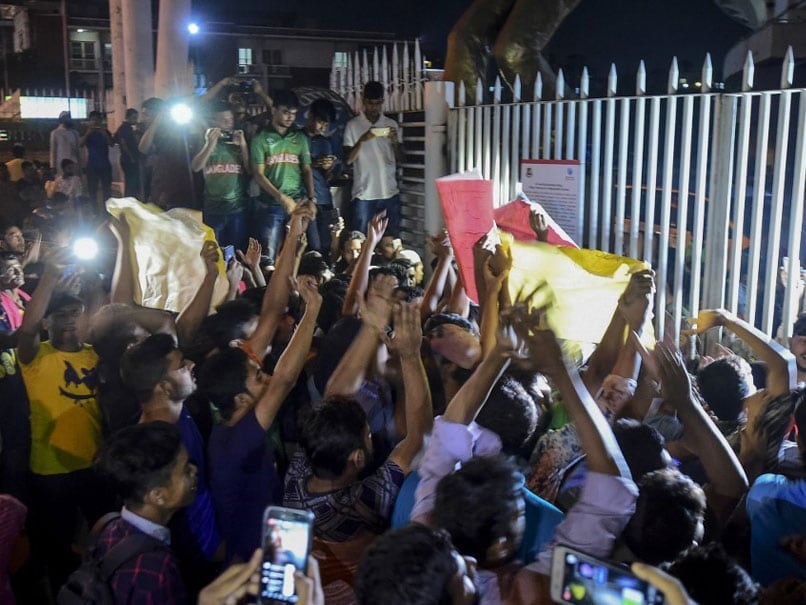 Hundreds of people staged a demonstration in a Bangladesh town against a ban against Shakib Al Hasan.© AFP

Hundreds of people staged a demonstration in a Bangladesh town on Wednesday against a two-year ban on cricket captain Shakib Al Hasan for not declaring attempts to bribe him. The ban on the 32-year-old superstar was announced on Tuesday by the International Cricket Council (ICC), which suspended one year of the punishment after Shakib "accepted three charges of breaching the ICC Anti-Corruption Code". Shakib made a public appeal for support after being banned, unleashing a flood of angry anti-ICC social media posts from his fans.

Police said about 700 people took to the streets in Shakib's hometown of Magura, demanding the ICC revoke the ban which came on the eve of Bangladesh's departure for a tour of India.

"The protesters shouted slogans and marched along a highway. They also formed a human chain as part of their action against the ICC decision," said Saiful Islam, police chief in the western town.

Protesters carried placards saying that Shakib was the victim of a "conspiracy".

Smaller protests were held in the capital Dhaka, police said.

The Test and T20 captain accepted charges that he had failed to disclose details of approaches made over a tri-nation series between Bangladesh, Sri Lanka and Zimbabwe in 2018 as well as the 2018 Indian Premier League (IPL).

Shakib will be eligible to return from October 29 next year but he is ruled out of the T20 World Cup in Australia which starts October 8.

"Those who have supported me over the years, I hope they, the fans, Bangladesh Cricket Board, the government, the journalists will continue to support me in my bad and good time," Shakib told reporters after the ban was announced.

"I am hopeful I will come back to cricket soon. I will be stronger and will perform my responsibilities with more sincerity," he said.

Shakib, who has played 56 Tests, 206 ODIs and 76 Twenty20 internationals, is Bangladesh's biggest sporting hero and has regularly topped the ICC rankings for all-rounders since 2009.

At this year's World Cup in England, Shakib scored more than 600 runs and picked up 11 wickets. He also became the fastest cricketer to reach 5,000 runs and 250 wickets in one-day internationals.

After the ban, Shakib stepped down from the MCC World Cricket committee, which said it was "sorry" to lose him but supported his resignation, which was "the right decision".

Bangladesh Cricket Board president Nazmul Hassan said Shakib's suspension was "shocking" as he is the centrepiece of the team.

"We have no substitute (for Shakib)... I was angry when I first heard about it and asked why he didn't inform me. We planned our India tour keeping Shakib in the team," Nazmul told reporters.

Bangladesh will play two Tests and three T20 internationals in its Indian tour that starts November 3.