Bangladesh Cricket Board (BCB) chief Nazmul Hassan has claimed that the board had no prior knowledge of the ICC's anti-corruption investigation on Shakib Al Hasan. 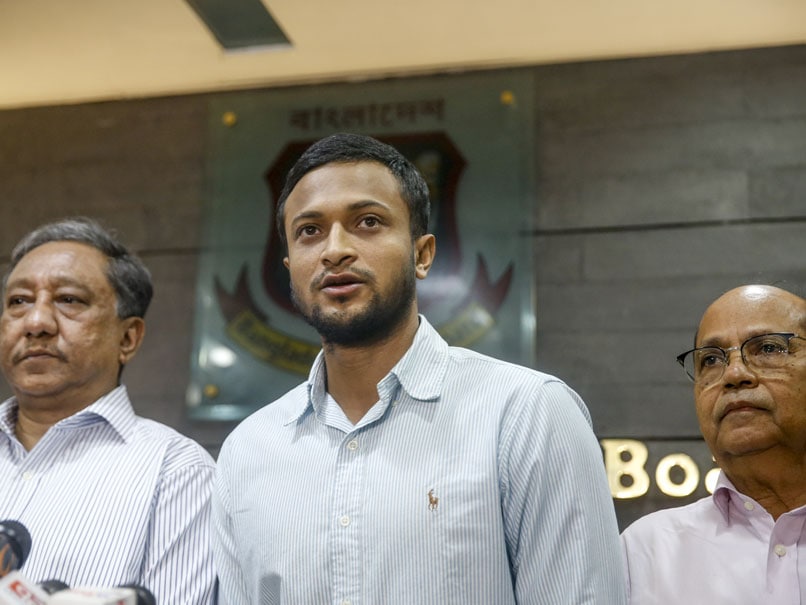 Shakib Al Hasan was handed a two-year ban for failing to report three approaches by a suspected bookie.© AFP

Bangladesh Cricket Board (BCB) chief Nazmul Hassan has claimed that the BCB had no inkling of the ICC's anti-corruption investigation of its Test and T20 captain Shakib Al Hasan, who was handed a two-year ban for failing to report three approaches by a suspected Indian bookie. Twelve months of this ban is a suspended sentence which will come into effect if Shakib fails to comply with the anti-corruption code of the International Cricket Council (ICC). The ICC announced the ban on Tuesday.

"I want to state something clearly and that is that neither I nor anyone from the BCB knew anything about the investigation, which has been going on from January," Hassan was quoted as saying by the local media.

"The ACU, an independent body, communicated with Shakib. He informed me two or three days ago following the meeting with the players regarding the strike," he insisted.

The one-year ban that he has to serve will keep Shakib out of next year's Indian Premier League (IPL) and also the World T20 to be held in Australia from October 18 to November 15 the same year.

The world number one ODI all-rounder failed to report the approaches made by suspected bookie Deepak Aggarwal, who had asked Shakib to provide information on team composition and strategy on three separate occasions.

One of the approaches was made on April 26, 2018 when his IPL franchise SunRisers Hyderabad (SRH) was to take on Kings XI Punjab. SRH won the game by 13 runs.

Aggarwal's other two approaches were during the Bangladesh Premier League when Shakib was playing for Dhaka Dynamites in 2017, followed by the tri-series against Zimbabwe and Sri Lanka in January 2018.

Aggarwal wanted to meet Shakib but the player didn't oblige as "...following their conversations, he had the feeling that Aggarwal was a bookie."

Hassan backed Shakib to come back as a better and wiser person. However, the board chief admitted that he was initially angry at the all-rounder for not reporting the approaches.

"I don't deny that I was angry at him for not reporting the issue but at the same time we are pleased that he has cooperated fully with the ICC's ACU (Anti-Corruption Unit) and has pledged his commitment to its education programme," said Hassan.

The shocking development came ahead of the tour of India beginning November 3. Shakib was supposed to captain the team in three T20s and two Tests. Mahmudullah Riyad and Mominul Haque were handed the reins of Bangladesh's T20 and Test squads respectively owing to Tuesday's developments.

"I have always said that we don't have substitutes for two players - Mashrafe (ODI captain) as a captain and Shakib as a player. He is one of the best players in the world. Him not being able to play is a real shock," Hassan said.

"We have a very important series in front of us. We are playing our first full series in India and ICC Test Championship is beginning. The planning behind everything was done with Shakib in mind," he added.

Shakib Al Hasan
Get the latest updates on ICC T20 Worldcup 2022, check out the Schedule and Live Score. Like us on Facebook or follow us on Twitter for more sports updates. You can also download the NDTV Cricket app for Android or iOS.