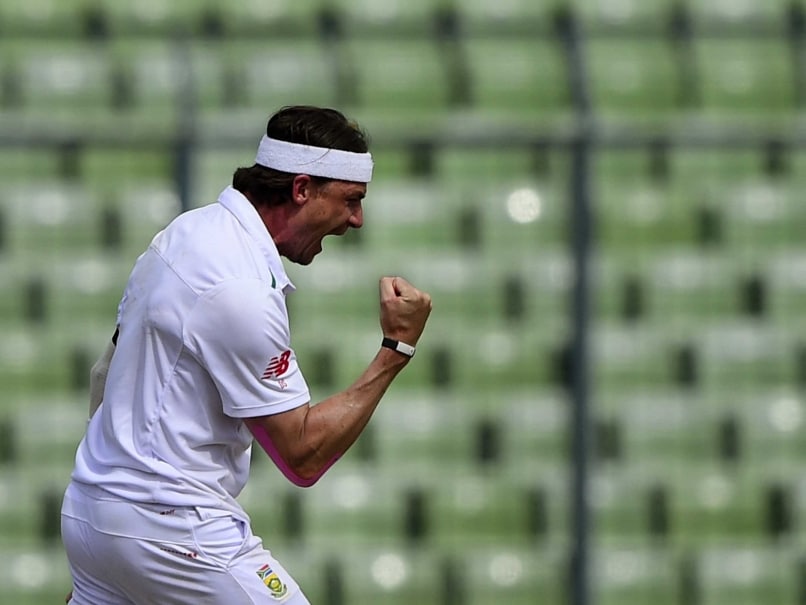 Dale Steyn led from the front from first ball to last to help negate at least some of Bangladesh's advantage of having won the toss and opting to bat on the first day of the series-deciding second Test at Mirpur on Thursday.

It had to be Steyn's day as he took his 400th Test wicket for South Africa and achieved it quicker than any other bowler in terms of the number of deliveries required for this landmark achievement. He finished the day with figures of 3/30 in 16.1 overs as Bangladesh closed on a relatively modest 246/8 from the 88.1 overs that were possible. (Scorecard)

It is difficult at this stage to tell which side took the overall honours. The pitch is a much more difficult one than the one for the first Test at Chittagong. While it played fairly flat in the morning session it started to give the bowlers much more help thereafter with a fair amount of turn and with the ball holding up as it went through the surface as well. (Steyn Joins 400 Test Wicket Club)

In addition, the three South African frontline seamers were able to get reverse swing from a relatively early stage of the innings.

Batting is clearly going to get progressively more difficult as the game proceeds and it will be no surprise if it does not go the full five days. Clearly the Proteas need to go big in their first innings because they will either want to avoid batting last altogether or only having to chase a small target in the fourth innings. (Johnson Joins 300 Test Wicket Club)

The Proteas, through Steyn in the first session and JP Duminy in the second, managed to affect early breakthroughs but it was only in the last session when they took 5/92 that they succeeded in making a major breach.

At 180/3, with both Mahmudullah and Mushfiqur Rahim well set, the situation looked ominous with Bangladesh likely to go past 300 for the second Test match in a row but then Steyn engineered a collapse with the support of Morne Morkel and spinners, Dean Elgar and Duminy, to see Bangladesh lose 5/66 in 25.3 overs.

Duminy was the pick of the supporting cast to Steyn, taking 3/27 in 15 well controlled overs.

The Bangladesh total was built around two major partnerships - Mominul Haque and Imrul Kayes putting on 69 for the second wicket and Mahmudullah and Mushfiqur 94 for the fourth. The latter made the top score of the day of 65 (125 balls, 7 fours) which means that neither side has recorded an individual century in the series to date.

It is a statistic the Proteas will want to change Friday. They certainly need at least one and preferably two three-figure scores from their top order when it comes to their turn to bat.

Dane Vilas was preferred to Quinton de Kock in the only change to the Proteas' line-up. He becomes the 87th player to represent the Proteas in the five-day format.

Comments
Topics mentioned in this article
Bangladesh Cricket Team South Africa Cricket Team Dane Vilas Cricket Dale Steyn
Get the latest updates on ICC Women's Cricket World Cup 2022 and IPL 2022, check out the Schedule , Live Score and IPL Points Table. Like us on Facebook or follow us on Twitter for more sports updates. You can also download the NDTV Cricket app for Android or iOS.