Jasprit Bumrah and TV presenter Sanjana Ganesan completed one month of their married life on Thursday but the couple couldn't be together to celebrate the occasion. 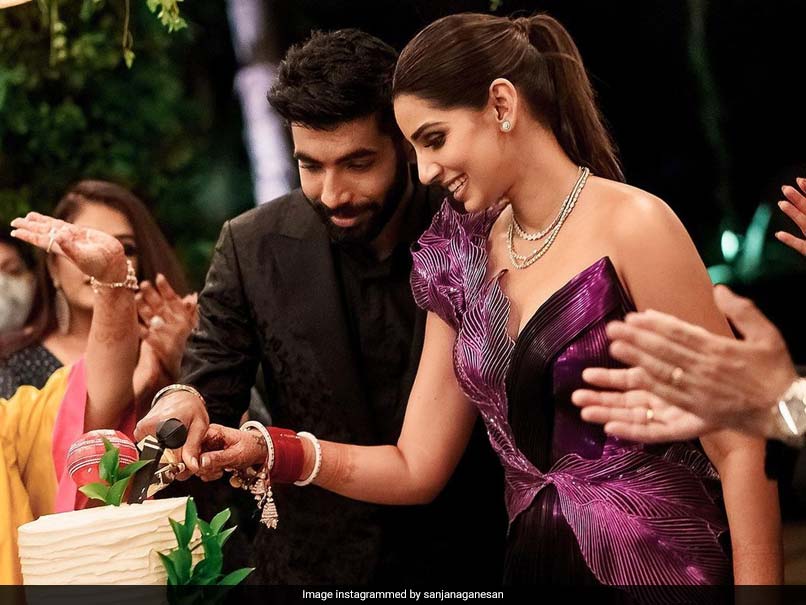 Jasprit Bumrah and Sanjana Ganesan got married on March 15.© Instagram

Jasprit Bumrah and TV presenter Sanjana Ganesan completed one month of their married life on Thursday but due to their professional commitments, the couple couldn't be together to celebrate the occasion. However, that didn't keep them from expressing their love for each other. Sanjana, who was seen hosting the pre-match show of the Rajasthan Royals vs Delhi Capitals match, took to Instagram to share a picture with Bumrah and wrote how this special occasion made her miss her husband and the cake "little extra". "Missing the husband and that cake a little extra today," read Sanjana Ganesan's caption on Instagram.

Earlier in the day, the Mumbai Indians fast bowler also took to Twitter to wish his wife on their one-month wedding anniversary. Sharing a beautiful picture with his wife, Bumrah wrote: "One month of love, belly laughs, silly jokes, long conversations and peace. One month of being married to my best friend".

Bumrah is currently in Chennai with the Mumbai Indians squad where they are scheduled to play their first five league games. His international journey began 2016 and since then he has gone on to become one of the key players in the Indian team. He has played 19 Tests, 67 ODIs and 50 T20Is for India.

In the new central contracts announced by the BCCI on Thursday, Bumrah has been retained in the top A+ grade, along side skipper Virat Kohli and his Mumbai Indians captain Rohit Sharma.

Bumrah has 111 wickets under his belt from 94 outings. With 27 wickets, he was one of the standout performers for Mumbai Indians as they lifted their fifth IPL trophy. However, the fast bowler is yet to get into his full rhythm, managing just two wickets from first two outings

Jasprit Bumrah Cricket
Get the latest updates on India vs South Africa and check out  Schedule, Results and Live Score. Like us on Facebook or follow us on Twitter for more sports updates. You can also download the NDTV Cricket app for Android or iOS.