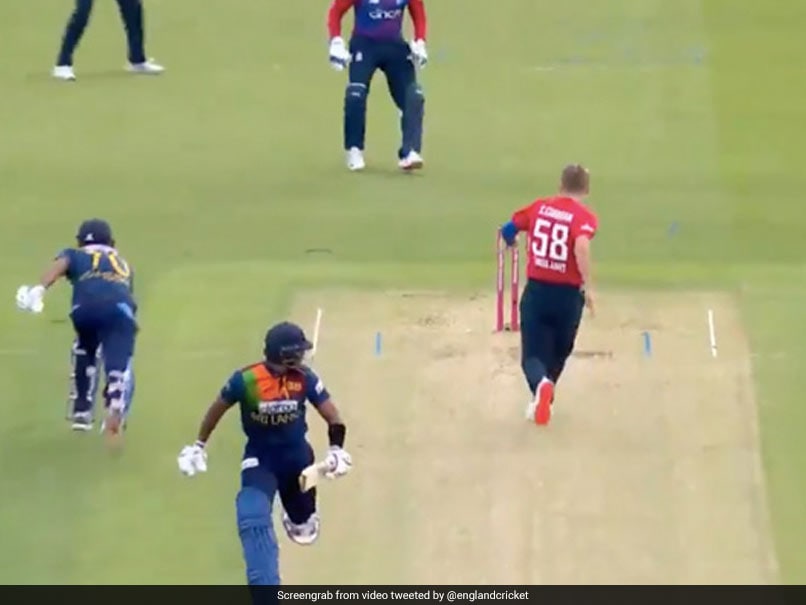 England all-rounder Sam Curran had put on display his football skills which dismissed Sri Lanka's opening batsman Danushka Gunathilaka in the second T20 international played at Cardiff. It all happened on the third ball of the second over when Sri Lanka's opening pair were on the crease, and they wanted a quick single. Gunathilaka from the non-striker's end called his batting partner Avishka Fernando to sneak a run. Fernando ran with a positive response from the non-striker's end, but Curran didn't let it happen. Curran ran towards the ball, and instead of picking the ball with his hand, he kicked the ball towards the wicket and ran out Gunathilaka without wasting the time.

"It's coming home! Back of the net, Sam Curran!"Englandcricket tweeted Gunathilaka run-out video.

Back of the net, @CurranSM!

"We need him to play vs Germany on Tuesday and England to win," the user replied on the ECB tweet.

"Make him play in the Euro 2020round of 16 for the England Football team," said another user.

"Need to get him in the team vs Germany," wrote another user.

Need to get him in the team v the Germans

Make him play in the round of 16 @EnglandFootball @EURO2020

Many users trolled English football captain Harry Kane and quipped the England football stakeholders to consider Curran in the team.

"More shots on target than Harry Kane," wrote a user.

England had already won the three-match T20I series against Sri Lanka as they are 2-0 up in the series, the third and final T20 will be played at Southampton on June 26.

After the T20s, the two sides will face up in three-match One-day International series starting June 29.

Sri Lanka Cricket Team Danushka Gunathilaka Euro 2020 Cricket
Get the latest updates on SA vs IND 2021-22, check out the Schedule and Live Score . Like us on Facebook or follow us on Twitter for more sports updates. You can also download the NDTV Cricket app for Android or iOS.