Kedar Jadhav wins over Internet as he reveals his favourite superstar between Salman Khan and MS Dhoni. 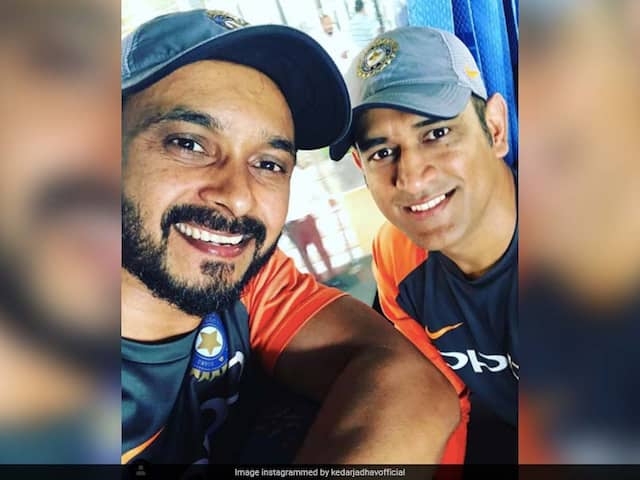 Kedar Jadhav credited MS Dhoni for his success at the international level.© Instagram

Chennai Super Kings' middle-order batsman Kedar Jadhav on Thursday went live on Instagram and talked about various topics while also naming his favourite "superstar" from among Bollywood actor Salman Khan and former India captain MS Dhoni. Kedar Jadhav picked his CSK captain over the actor and said that it was because of MS Dhoni that he got the chance to meet Salman Khan. "For me both are superstars, I cannot differentiate. Because of MS Dhoni I was able to play the duration that I played and because of Mahi bhai I get to meet Salman bhai. So, I think it will be always Mahi bhai first and then Salman bhai," Kedar Jadhav said during an Instagram live session.

He then added that picking between Salman and Dhoni is like choosing your favourite between your parents.

"It is very difficult for me it like asking which parent you like the most, is your mom favourite or is your dad favourite," Jadhav added.

Jadhav also revealed that while growing up, like most of the people in the country, he looked up to Sachin Tendulkar but he regrets not sharing the dressing room with the legend of Indian cricket.

"Growing up for almost 99% of the people, it was Sachin Tendulkar but I always regret that I couldn't play with him for India," Jadhav mentioned.

The 35-year-old batsman said that when he first met Dhoni, he was intimidated by him but he had a calming effect on him.

"When I met Mahi bhai, my impression was he's India captain, he's very strict and you know he is very calm but he is very focussed. I used to get very intimidated by him even when he was relaxed. After meeting him, I don't see any other image when it comes to favourite cricketer, it has to be MS Dhoni," Jadhav concluded.

Kedar Jadhav Cricket
Get the latest Cricket news, check out the India cricket schedule, Cricket live score . Like us on Facebook or follow us on Twitter for more sports updates. You can also download the NDTV Cricket app for Android or iOS.