Saeed Ajmal wants to be better than the best in cricket

His superlative show against England lifted Ajmal to the top spot in the International Cricket Council rankings for a brief period but he has since slipped to fourth place. 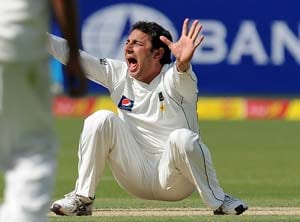 "I will try my best and want to be the number one Test bowler," said Ajmal, who wrecked the then top Test team England with 24 wickets here last year but has a decidedly less glorious track record against South Africa -- now the world's best team.

His superlative show against England lifted Ajmal to the top spot in the International Cricket Council rankings for a brief period but he has since slipped to fourth place.

The Faisalabad-born bowler, who celebrates his 36th birthday on the first day of the upcoming test, played down the pressure of being Pakistan's main weapon against the Proteas.

"Every day is a new day for me and every match is a new match. I try my best in every match and want to perform in the same manner as I did in the last one without taking on extra pressure," said Ajmal who has an average record against South Africa.

He managed just three wickets in the first Test in Dubai in 2010 before being dropped from the second Test in a 0-0 drawn then.

Ajmal took a ten-for on a spin-friendly Cape Town pitch in a lost cause in February this year but failed in the remaining two matches, getting only a single wicket.

That prompted captain Misbah-ul Haq to urge Ajmal to lift his performance if he wants to anchor the team's win against South Africa. But the spinner insisted he doesn't need to vary his style to take wickets.

"I will go into the Test with 100 percent confidence. I have only one target and that is to take more and more wickets, be it (Graeme) Smith or (Jacques) Kallis, I bowl as I bowl," said Ajmal.

But the lengthy gaps in between tests, he said, takes its toll.

"Big gaps are not good. It's not very positive and you need 15-20 days to regain your rhythm. But we had a camp and practice matches so I am okay with my rhythm and, come Monday, I will try to be at my best," said Ajmal.

The second Test starts in Dubai from October 23 followed by five one-day and two Twenty20 internationals.

Pakistan have been forced to play their home matches in the UAE since the 2009 terror attack on a Sri Lankan team bus.

Comments
Topics mentioned in this article
Cricket Stuart Broad Saeed Ajmal Zaheer Abbas Mohammad Asif Pakistan Cricket Team New Zealand Cricket Team South Africa Cricket Team
Get the latest updates on ICC T20 Worldcup 2022 and CWG 2022 check out the Schedule, Live Score and Medals Tally. Like us on Facebook or follow us on Twitter for more sports updates. You can also download the NDTV Cricket app for Android or iOS.