Sachin says it is important for him to enjoy the sport and like any other parent, is proud that Arjun has been selected for the Mumbai U-14 team. 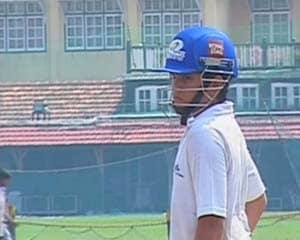 Sachin Tendulkar has always epitomised a cricketer's love for the sport. With son Arjun being picked for the U-14 Mumbai squad, the legendary batsman has the same advise and wants him to play like a 'normal team member.'

Arjun was named in the team for the West Zone league matches to be played from 20th January to 1st February at Ahmedabad. Expressing his pleasure, Tendulkar hopes he enjoys the beautiful game. "Like any other parent, I feel happy and proud that Arjun is part of the Mumbai U-14 team. I hope people leave him alone to enjoy this beautiful game as a normal team member," he said.

The lef-handed batsman and a medium pacer, Arjun slammed his first century in the MCA's Under-14 selection trials held at the Cross Maidan in Mumbai on May 26, 2012. Tendulkar though has always maintained that there is no pressure on his son and that it is very important for him to enjoy the game.