Tendulkar, meanwhile, appeared to have recovered from his left wrist injury that kept him out for four IPL matches including two in the play-offs. 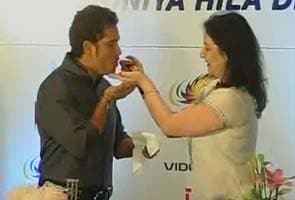 The last time Sachin Tendulkar was here in Kolkata, he celebrated his 40th birthday, this time it's his 18th marriage anniversary though he is observing the occasion a day later the exact date.

According to sources at the team hotel, Tendulkar's wife is arriving here as the couple plan to celebrate their marriage anniversary quietly, though a day later.

"We have no idea about their plans but we have come to know about Anjali's arrival this evening. Probably, they will cut a customary cake," a hotel staff said.

Tendulkar, meanwhile, appeared to have recovered from his left wrist injury that kept him out for four IPL matches including two in the play-offs.

"He looks relaxed and comfortable. We, and all his fans, would like to see him in the final and lifting the trophy tomorrow," the hotel staff added.

Comments
Topics mentioned in this article
Cricket Sachin Ramesh Tendulkar Anjali Tendulkar
Get the latest Cricket news, check out the India cricket schedule, Cricket live score . Like us on Facebook or follow us on Twitter for more sports updates. You can also download the NDTV Cricket app for Android or iOS.