Marylebone Cricket Club in May confirmed that Brian Lara will join an MCC XI captained by Sachin Tendulkar, which will also include Australia's Aaron Finch, India's Rahul Dravid and Pakistan off-spinner Saeed Ajmal. 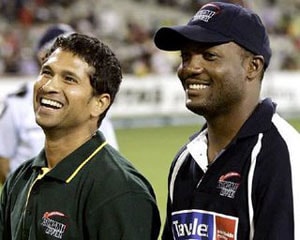 Sachin Tendulkar and Brian Lara will play together for Marylebone Cricket Club in Lord's bicentenary.

Retired Indian cricketing legend Sachin Tendulkar said on Tuesday he is savouring the opportunity to pair up with West Indies great Brian Lara at Lord's for an exhibition match marking its 200th anniversary.

The side will play a Rest of the World XI captained by former Australia leg spinner Shane Warne and featuring Sri Lanka's Muttiah Muralitharan and England's Kevin Pietersen in a 50-over match on July 5. Tendulkar said he and Lara played together in 1994 in Toronto in the Sky Dome.

"We played for the same team and we had a wonderful partnership. So I'm hoping for another one this time," he told reporters at the Singapore Cricket Club.

Tendulkar is in the city-state for a promotional tour. "It's always been a joy to play against him. I loved watching Brian scoring runs against other nations, not India," Tendulkar said.

Tendulkar, who held a "masterclass" for young cricketers on Tuesday, said it is "surely possible" for cricket minnows Singapore to host top cricket events. The wealthy city-state has a rising number of Indian expatriates and later in June will open a new national stadium that can be converted into a 35,000-seater cricket arena. "I don't see any reason why not... whenever we played here in Singapore, the response was really good," said Tendulkar, 41, who retired last year as the world's leading batsman in both Test and one-day cricket.

"As a cricketer I feel proud that various nations are taking initiatives in constructing state-of-the-art stadiums and making sure that every measure is taken to globalise the game," he said.

Tendulkar also said investigations by the International Cricket Council (ICC) into corruption are "critical for the game". "I think the concerned people are taking really important steps because it is critical for the game to make sure that the spectators... watch a fair competition," he said.

ICC chief executive Dave Richardson said last month an inquiry into a match and spot-fixing scandal which has rocked world cricket is entering its final stages.