The Indian batting legend was passionate as ever while on the cricket field and nothing could dampen his spirit. 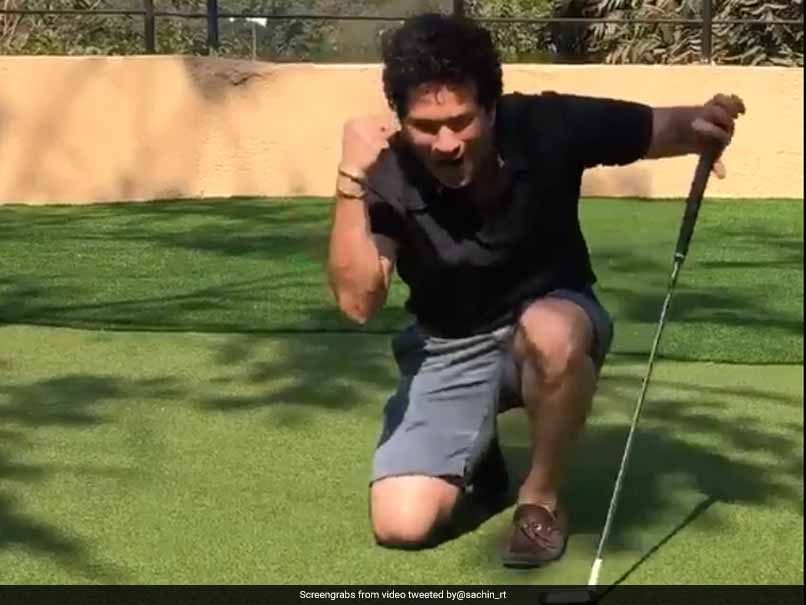 Cricket legend Sachin Tendulkar dominated the 22-yard pitch for over two decades and does not shy away from showing his love for the game of cricket. Like other cricketers, Tendulkar is also quite active on social media and is often seen encouraging young Indians to take up any sport and help the country excel at international level. The Indian batting legend was passionate as ever while on the cricket field and nothing could dampen his spirit. That drive allowed Tendulkar to play the game as long as he did. On Saturday, Tendulkar once again showed off his enthusiasm but this time on a different green turf.

Tendulkar, in a video uploaded on Twitter from his official handle, can be seen successfully putting the golf ball and his celebration puts the icing on the cake.

The video captioned as, "Nothing like spending time with friends and playing a sport. It gives you some unforgettable moments..." captures the pure joy on the Master Blasters' face when he aces his shot.

Nothing like spending time with friends and playing a sport. It gives you some unforgettable moments... :-)) pic.twitter.com/uPfmNuvxeP

During his playing days, Tendulkar was feared by many pacers as he would put them away for boundaries at will. His shot in the video may very well remind fans of his blissful straight drives which would leave the bowlers frustrated.

Former Australian pacer Brett Lee, who shares a close bond with the Indian cricketer, often says that the Indian was one of the toughest batsman to bowl to.

Earlier in the day, Yuvraj Singh posted a photo on Instagram with Tendulkar and Ajit Agarkar, where the three of them can be seen enjoying a pre-New Year's party. Yuvraj captioned the image as "Thanks @sachintendulkar for the lovely night was great fun #monster Agarkar."

Soon after the post, fans flooded the comments section and expressed their love and gratitude for the trio. While one of the user mentioned that this photo reminded her of best childhood cricket memories, many of the users expressed their desire of watching Yuvraj donning the blue jersey again.

Comments
Topics mentioned in this article
India Cricket Team Sachin Tendulkar Cricket
Get the latest updates on India vs Australia and check out  Schedule, Results and Live Score. Like us on Facebook or follow us on Twitter for more sports updates. You can also download the NDTV Cricket app for Android or iOS.