"When Sunil Gavaskar announced his retirement people thought our team would no longer survive. However, we evolved and youngsters came and slowly took over," said Kapil Dev. 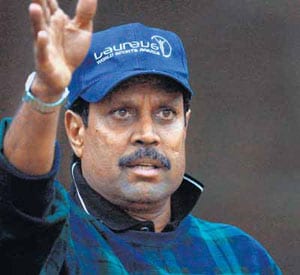 Kapil Dev on Sunday said that Sachin Tendulkar is in good form and expressed an wish to see the batting maestro complete 30 years in international cricket.

"It is great that he (Sachin) has completed 23 years in international cricket. I wish him to complete 30 years. He is playing good," Kapil told reporters here in reply to a query on Tendulkar's role in the Indian team.

The former India captain, who was in the city for an interaction with students, parents and faculty members of Royal Global School, however, refused to give a direct answer on his earlier comments on ICC's day-night Test cricket formula.

"When the time comes for the Board (BCCI) to decide on the matter, then we can say something," said Kapil who had earlier objected the idea of having day-night Tests.

He said the retirement of Rahul Dravid and VVS Laxman would not hamper the performance of Team India in the Test format.

"When Sunil Gavaskar announced his retirement people thought our team would no longer survive. However, we evolved and youngsters came and slowly took over.

"Now we have players like Kohli and Pujara who are performing well. Youngsters will be there to replace people who retire," the Haryana Hurricane said.

Asked about conferring the Bharat Ratna to cricketers and other sportspersons, Kapil said, "Policy makers should be asked this question. However, if any sportsperson is granted such honours we will all definitely feel proud.

"All of us felt proud when Sachin was nominated to Rajya Sabha."

Asked about Indo-Pak cricket ties, Kapil said, "If sport becomes the medium to bring two countries closer we would be happy. What happens in the political field is up to the respective governments of the two countries."

On a question about pitches in different countries, the former all-rounder said the Indian team found it difficult to handle bouncy pitches in England and South Africa, while those teams are at a disadvantage in India where pitches are spinner-friendly.

"This has been going on since last 50 years. In places like England they have seamer friendly wickets, while here we have our own spinner friendly ones."

"When we go to play in England, do they develop pitches friendly for spinners? So we should all enjoy the unique characteristic of each pitch," he said, adding there is, however, no harm in developing hard pitches here for training Indian players.

Regarding the Twenty-20 format, Kapil said it is popular and with time it will evolve and develop.

Asked about the lack of cricketing talents from the North East in the national arena, Kapil said it is the duty of the local associations to nurture and develop players.

"If somebody like Dhoni can come from Jharkhand and become the Indian skipper, why cannot there be players from Assam? All you need to do is provide facilities and encourage players."

"How many world-class cricket stadiums were there in the country 25 years ago? Now even places like Silchar and Rajkot have day and night lighting facilities," Kapil said.

He said he is satisfied with his role as a Hindi commentator and 70 per cent of the country's people want to listen to Hindi commentary of international matches.

"Cricket is spreading in rural areas. With promotion of Hindi commentary, results will be evident in next 10-15 years and more youngsters will take up the game," he said.