Sachin Tendulkar is currently on a vacation in a mysterious location and has been keeping his fans well-updated about his good time there through social media. 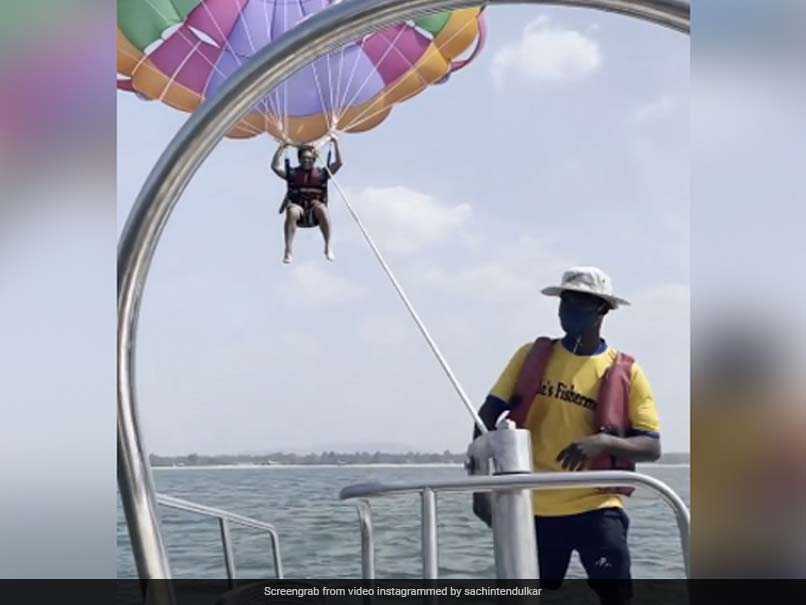 Sachin Tendulkar shared a video of him parasailing to a famous Ritviz song.© Instagram

Taking the break amid the chaotic coronavirus pandemic, Sachin Tendulkar is currently on a vacation. The cricket legend has taken to social media, to share multiple photos lately, but hasn't revealed his whereabouts. He took to Instagram on Monday, with the ultimate relaxing video of him parasailing. The video also has the famous song by Ritviz, "Udd Gaye". Ritviz is a Indian singer-songwriter. Sachin captioned the cool post as, "Hum toh Udd Gaye! #parasailing #adventure #watersports". Here is the video:

The post received the usual lovable reaction from his fans, with many showering him with well-wishes.

Keeping his fans updated about his mysterious getaway, Sachin also recently uploaded a photo with his son, Arjun. In the photo, the duo donned stylish sunglasses and posed for a selfie. He captioned it as, "Vacation Vibes".

With the pandemic, the former cricketer's social media posts have been very cheerful and vibrant. They range from food recipes and family photographs to many quirky moments.

He played a crucial role in India's 2011 ODI World Cup win under MS Dhoni's captaincy. India defeated Sri Lanka by six wickets in the final at the Wankhede Stadium. Sachin was India's leading run-scorer and second highest run-scorer overall in the competition.

He finished his career in 2013 as the highest run scorer in Tests and ODIs, records that stand to this day.