Rohit Sharma Once Felt Like Punching Ravindra Jadeja. Here's Why

Ajinkya Rahane and Rohit Sharma narrated an incident when Ravindra Jadeja almost put them in trouble and the Mumbai Indians' captain almost felt like punching the India all-rounder. 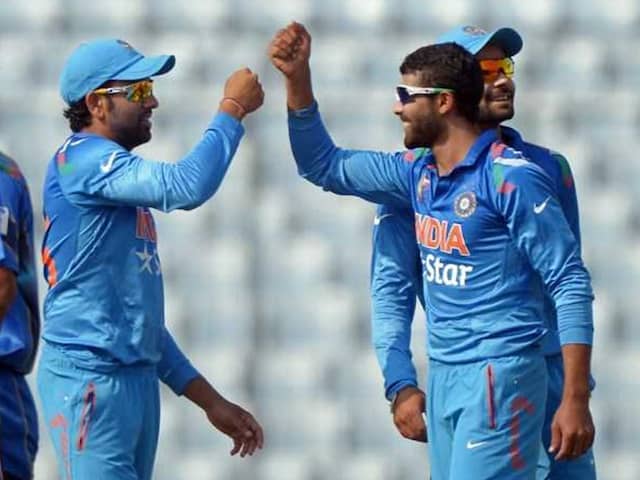 Rohit Sharma is known for his calm and composed demeanour on the field.© AFP

India batsman Rohit Sharma is known for his calm and composed demeanour on the field. The Indian opener is hardly seen talking aggressively with his team-mates. But there was an incident when Rohit Sharma lost his cool and felt like punching his team-mate Ravindra Jadeja. Earlier this year, India had gone to South Africa for a long series. They played three Tests, six ODIs and three T20Is there. During the tour, Rohit Sharma, Ajinkya Rahane and Ravindra Jadeja decided to go for a jungle safari and during a recent episode of the 'What The Duck' show, Ajinkya Rahane and Rohit Sharma narrated the incident when Ravindra Jadeja almost put everyone in trouble and the Mumbai Indians captain felt like punching the India all-rounder.

"I remember many things during safari and we had lots of fun. But one incident that took place was cheetah walking. So, we thought that cheetah walking meant that we would be walking behind 2-3 cheetahs but we were actually in the jungle and we didn't know what was around us. And, the moment we reached there - me, Radhika (Rahane's wife), Ritika (Rohit's wife), Rohit and Jadeja - reached the centre of the jungle, there were two cheetahs who had just caught a prey. And when all of us reached there, they turned around and looked at us," Ajinkya Rahane said during the chat show.

"It was because of Jadeja. He was making some weird noises and calling them. And we said, 'What are you doing?! We are in a jungle. If the cheetahs see us, they will make us their prey'. But it was the best experience of our lives," Rohit said.

"The moment Jadeja started making noises, those cheetahs turned around to look at us. At that time, only I know what was going through my mind. I looked at Jadeja angrily and I felt like punching him but then I thought that it is necessary to stay calm now," Rohit Sharma added.