Rohit Sharma added a boost to the Spanish football league La Liga when he became the tournament's brand ambassador. 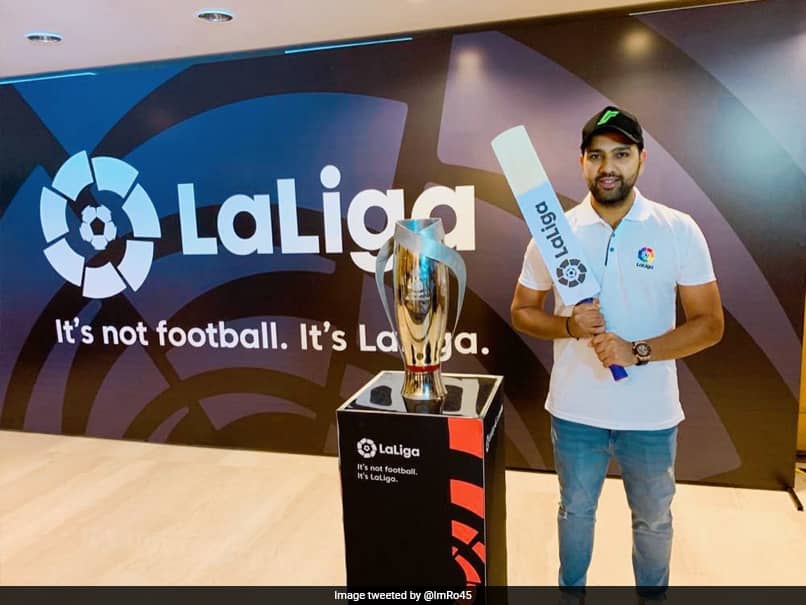 Rohit Sharma took to Twitter to announce his partnership with La Liga.© Twitter@ImRo45

Rohit Sharma, who got India off to an explosive start in the third and final Twenty20 International (T20I) against the West Indies in Mumbai on Wednesday, has been named Spanish football league La Liga's brand ambassador. On Thursday, Rohit Sharma took to Twitter to announce his new partnership. "Hola India/Espana, as you guys know, football has always held a special place in my heart so this association is so special to me. And to be named the ambassador for the La Liga is so humbling. So excited for this partnership @LaLigaEN," Rohit Sharma tweeted.

Hola India/Espana, as you guys know, football has always held a special place in my heart so this association is so special to me. And to be named the ambassador for the La Liga is so humbling. So excited for this partnership @LaLigaEN pic.twitter.com/prZFFSeHdV

La Liga is contested by 20 teams in Spain and a total of 62 teams have competed in the competition since its inception.

Nine teams have been crowned champions, with Real Madrid winning the title a record 33 times and Barcelona, who won the inaugural title in 1929, 26 times.

As of now, current holders Barcelona lead the title race on goal difference. Real Madrid are a close second with 34 points too.

Fierce rivals Barcelona and Real Madrid are due to face each other in El Clasico on December 18.

Coming back to cricket, Rohit Sharma, KL Rahul and skipper Virat Kohli hit 16 sixes in total as India posted 240/3 against the West Indies on Wednesday.

Rohit Sharma (71) and KL Rahul (91) put on 135 runs for the opening wicket to lay the platform for India's imposing total.

Rohit Sharma also became the first Indian batsman to hit over 400 international sixes with his first of five strikes over the fence.

Real Madrid Football
Get the latest updates on India vs England Series, India vs England , live score and IPL 2021 Auction . Like us on Facebook or follow us on Twitter for more sports updates. You can also download the NDTV Cricket app for Android or iOS.