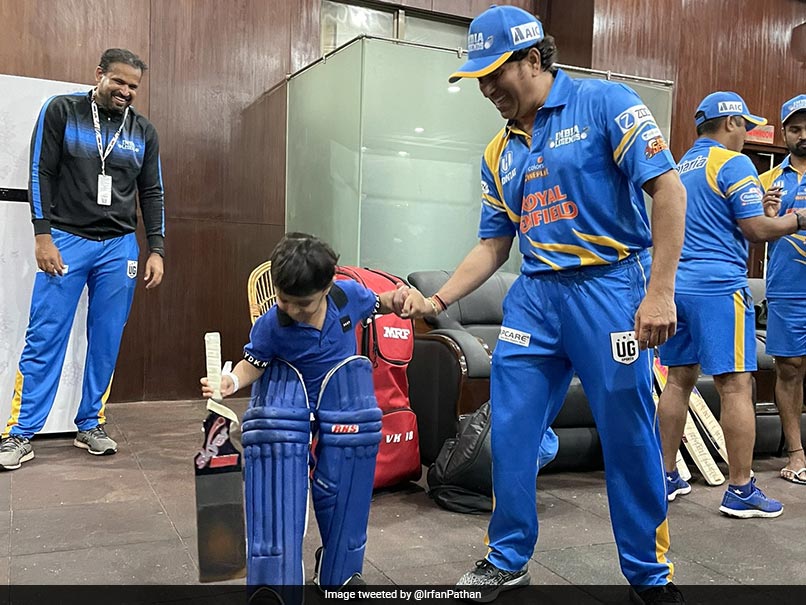 Sachin Tendulkar with Irfan Pathan's son, who was all padded up.© Twitter

Former India all-rounder Irfan Pathan on Sunday tweeted pictures from the India Legends dressing room after their win against South Africa Legends in the Road Safety World Series in Raipur. The pictures also starred a cute special guest in the form of Irfan Pathan's son, Imran. "Imran is ready to open with the master @sachin_rt paaji," Irfan tweeted along with the pictures, which featured Imran, padded up, along with Sachin Tendulkar. One of the photos also had Makhaya Ntini, who featured for South Africa Legends in the game.

Imran is ready to open with the master @sachin_rt paaji #cricket #Makhayantini pic.twitter.com/7OlBxJL9dD

In the match, Sachin Tendulkar and Yuvraj Singh blitzed half-centuries to power India Legends to a 56-run win.

South Africa Legends won the toss and opted to field. They got off to a good start as Virender Sehwag was dismissed for just 6 in the 2nd over.

However, Sachin Tendulkar then put on a 95-run stand with S Badrinath, before being dismissed for 60 off 37 deliveries.

S Badrinath retired not out having made 42 off 34, but Yuvraj Singh took over and smashed 52 off just 22 deliveries as India Legends finished with 204/3.

Yuvraj rolled back the years as he even hit four sixes in a single over.

Irfan Pathan Cricket
Get the latest updates on Fifa Worldcup 2022 and check out  Fifa World Cup Schedule, Stats and Live Cricket Score. Like us on Facebook or follow us on Twitter for more sports updates. You can also download the NDTV Cricket app for Android or iOS.