Richard Pybus to take over as Bangladesh coach

South African Richard Pybus has been named the Bangladesh coach for a two-year term, succeeding Australian Stuart Law who resigned in April. 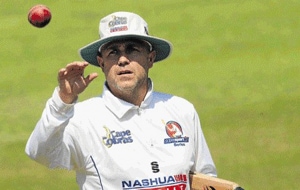 South African Richard Pybus has been named the Bangladesh coach for a two-year term, succeeding Australian Stuart Law who resigned in April.

The 47-year-old Pybus will be Bangladesh's third coach in a year as Law had been in the post for only nine months after succeeding another Australian Jamie Siddons last July.

Pybus, the former Pakistan coach, is expected to join the Bangladesh side before their tour of Zimbabwe next month.

"I am delighted at the opportunity of coaching Bangladesh. I am looking forward to getting busy with the boys," Pybus was quoted as saying at the official Bangladesh Cricket Board website.

"We have an active schedule ahead of us and for me the next few months will be about building relationships with the players and the coaching staff and ensuring that the progress made up to the Asia Cup continues."

Pybus, who hasn't been in charge of an international side since 2003, had flown to Bangladesh earlier this month to interview for the national coach's role.

He was with Cobras of South Africa until March 2012 before deciding to throw his hat into the ring for Bangladesh coach's job.

Comments
Topics mentioned in this article
Cricket Richard Alexander Pybus Bangladesh Cricket Team Stuart Grant Law Cape Cobras James Darren Siddons
Get the latest updates on IPL 2020, check out the IPL Schedule for 2020 and Indian Premier League (IPL) Cricket live score . Like us on Facebook or follow us on Twitter for more sports updates. You can also download the NDTV Cricket app for Android or iOS.