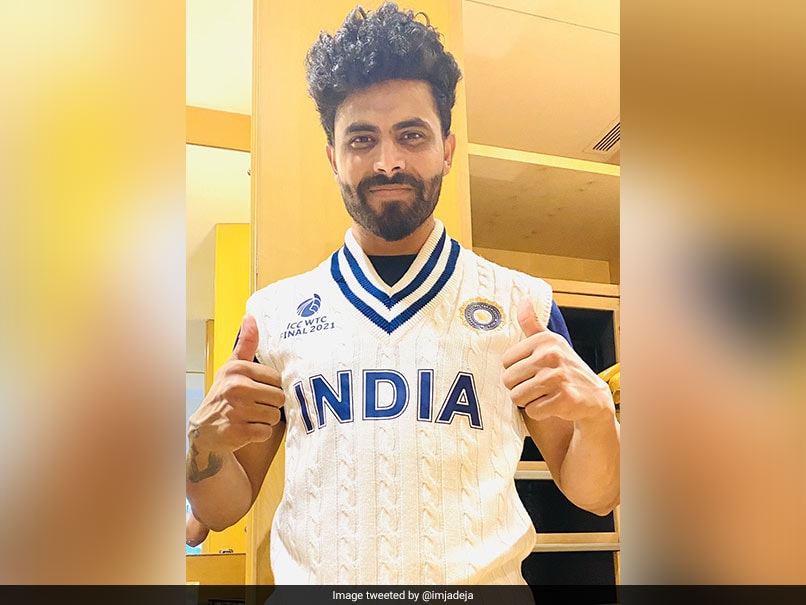 Ravindra Jadeja posted a picture of him wearing a Team India sweater as the team gets ready for the final of the World Test Championship (WTC) next month. "Rewind to the 90's", wrote Jadeja as he sported that sweater that had "India" knitted on the front and "ICC WTC Final 2021" on the side. The pic drew a comment from former India cricketer Wasim Jaffer, who responded with an iconic Anil Kapoor dialogue. India will play New Zealand in the final of the Test Championship starting June 18 in Southampton.

Jadeja returns to the squad for the final and the five-match Test series against England in August-September after recovering from a thumb injury he sustained during India's tour of Australia in 2020-21.

The picture drew comments from fans as they expected Jadeja to star in the all-important final.

"Eagerly Waiting for ur comeback #Jadeja", wrote another.

Eagerly Waiting for ur comeback #Jadeja

Jadeja, ranked No. 3 in ICC Test rankings for all-rounders, was last seen in action during the Indian Premier League (IPL) 2021. He returned 131 runs and six wickets from seven matches for Chennai Super Kings.

With 51 Tests under his belt and 1954 runs at 36.18 and 220 wickets at 24.32, Jadeja is one of the senior members of the Test squad and he is likely to feature as the only all-rounder in the Indian XI in the absence of Hardik Pandya, who hasn't been picked for the tour.

The International Cricket Council (ICC) stated in the playing conditions for the final that the teams will share the championship in the event of a draw and provisioned a reserve day should the Test not yield a positive result due to loss in playing time.

India made the final of WTC by winning their home series against England 3-1 in March to finish at the top of the points table with 520 points. New Zealand finished second with 420 points.