Ravinchandran Ashwin has taken Indore by storm on Day 3 of the third cricket Test between India and New Zealand. The Kiwis collapsed in a heap as the hosts enjoyed the spinning conditions at Holkar Stadium 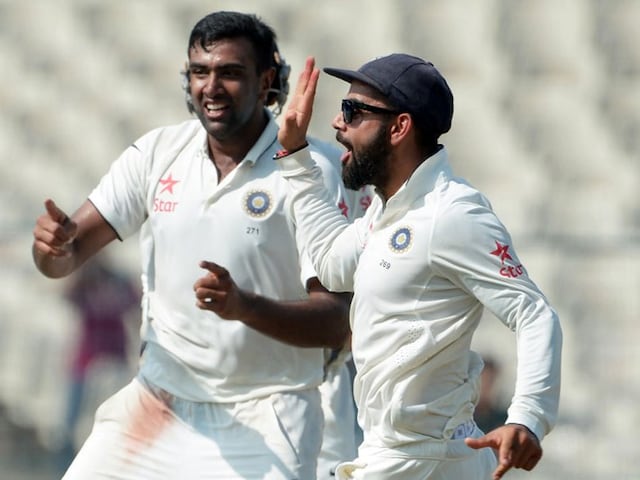 "There are quite a few players making big impact for their respective sides. Especially bowlers. Bowlers are the one I feel that win you Test matches and Ravichandran Ashwin is one of them," India Test skipper Virat Kohli recently said of leading off-spinner.

When it comes to impactful players, there is no doubting Kohli's words on Ravichandran Ashwin. The 30-year-old all-rounder has been in awesome form for India in recent times. Ashwin has been consistent with both bat and ball for his team, and in Tests, has arguably been the country's best player this year.

After playing a key role in the 2-0 series win in the West Indies, the Chennai cricketer has carried his fine form into the home series vs New Zealand. Ravichandran Ashwin completed his haul of 200 wickets during his match-winning spell in New Zealand's second innings in the 1st Test.

On Monday, the off-spinner took Indore by storm, claiming six wickets in New Zealand's first innings on Day 3 of the third cricket Test, to give India a shot at a 3-0 clean sweep over the hapless New Zealanders.

In response to India's 557/5 (declared) on Day 2, New Zealand had begun well, with openers Tom Latham and Martin Guptill setting up a 118-run stand for the first wicket in the first session of the third day.

Ravichandran Ashwin took over the show from this stage. He first dismissed Latham for a score of 53, taking a catch off his own delivery. A few overs later, Blackcaps' skipper Kane Williamson's wickets were uprooted from a clever Ashwin delivery.

Ashwin then dismissed both Ross Taylor and Luke Ronchi for ducks, both catches being taken by Ajinkya Rahane, as the visitors' batting line-up suffered a major collapse.

To cap off his brilliant post-luch spell, Ashwin deflected a Jimmy Neesham shot into the stumps, with Martin Guptill out of his crease, to send the New Zealand opener back to the pavilion, having scored 72 runs.

Ashwin completed his five wicket haul, the 20th of his career and fifth against New Zealand in Tests, when he later dismissed Neesham for an lbw in the final session. A few minutes later, Ashwin dismissed Trent Boult as New Zealand folded for a total of 299 runs, giving India a convincing first innings lead of 258 runs.

The Boult wicket meant that Ashwin ended the innings with figures of 6 wickets for 81 runs from 27.2 overs, as India took firm control of the Indore Test.

Later, cricket great Sunil Gavaskar lauded Ashwin for his exploits with the ball. "Patience has been a keey factor in Ashwin's evolution into a wicket-taking bowler," he told NDTV.