Ravichandran Ashwin picked seven wickets, having taken six wickets in New Zealand's first innings, to hand India a comprehensive 321-run win in the 3rd Test in Indore and a 3-0 series whitewash over the Kiwis 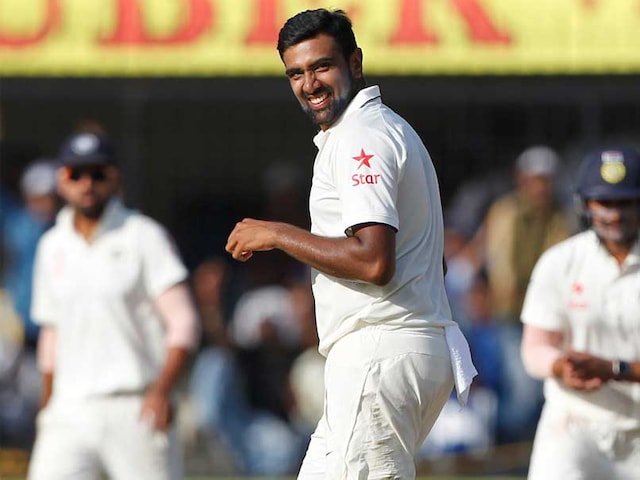 R Ashwin picked up 13 wickets in total in the 3rd Test as India romped to victory.© BCCI

Cricket followers are falling short of adjectives when it comes to describing Ravichandran Ashwin's incredible form in the sport in recent times.

The 30-year-old all-rounder has been a game-changer for India in Test cricket this year. Ashwin has been consistent with both bat and ball for the Virat Kohli-led team, and in most fans' eyes, has been the country's best player in the sport's longest format.

After starring in India's Test series win over West Indies in the summer, Ashwin has been highly effective once again in the home series against New Zealand.

'Highly effective' will probably be an understatement, given that the off-spinner dismissed 27 New Zealand batsmen throughout the six innings in the series.

On Tuesday, the Blackcaps faced the wrath of Ashwin for one last time in this Test series, as the spinner went on a rampage in the Kiwis' 2nd innings.

Having set New Zealand a target of 475 after declaring at 216/3 in their second innings, a win didn't seem far away for India, but the manner of triumph left quite a few jaws dropped.

Once Umesh Yadav dismissed Tom Latham, India looked well in charge of the 3rd Test. Ashwin then bowled out Kane Williamson, making it four dismissal from the four innings the New Zealand skipper has been on the crease.

It all fell like a pack of cards for the visitors soon. Ashwin sent Ross Taylor and Luke Ronchi back to the pavilion, before uprooting the wickets of Mitchell Santner and Jeetan Patel. Shortly after, a wild shot from Matt Henry from an Ashwin delivery safely landed in Mohammed Shami's hands, as India inched closer to a 3-0 whitewash over New Zealand.

After some brief resistance from Trent Boult and BJ Watling for the last wicket, Ashwin finally caught a Boult shot from his own delivery, completing his 13th wicket in the match and a 321-run win.

"It was a wicket where you had to work hard, be patient. there was a little bit of help outside the off stump, in terms of footmarks. Second innings, they helped us out with their shots," he said during the presentation.

"Virat had told me he was trying to rotate the bowlers, and it did help, Jaddu got the wicket of Guptill. I feel really good about myself and my confidence is sky high," Ashwin added.

Ashwin finished the innings with figures of 7 wickets for 59 runs, following on from his 6/81 in the first innings of the Test.