Ravi Shastri's Tweet On "Too Many 36's" In Indian Cricket. See Pic 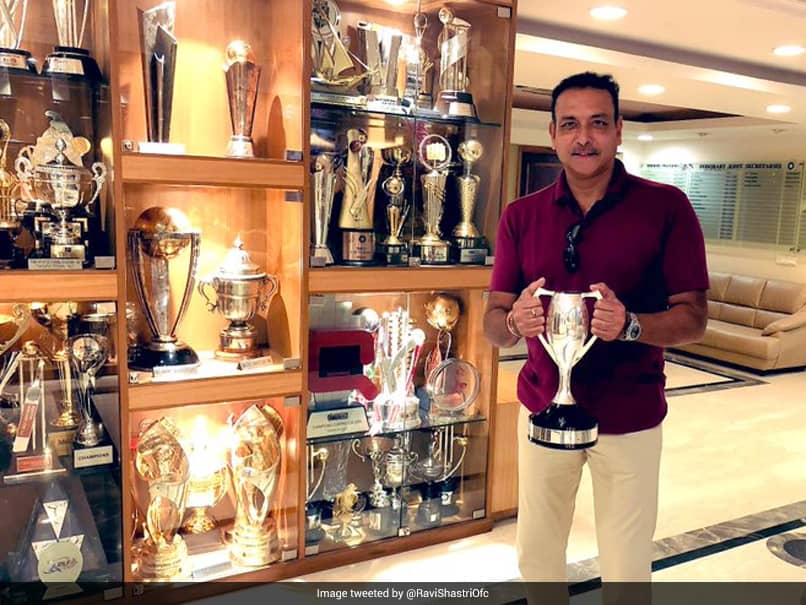 Ravi Shastri posted a picture on social media, posing with a trophy in hand.© Twitter

Head coach Ravi Shastri on Wednesday highlighted how the number 36 is significant in Indian cricket history and how the number has played a big role in not just his own career, but also in developing Indian cricket. "Ha. Too many 36's. Six 6s mine. Team 36 Adelaide. One day number 36. Gavaskar 36. @YUVSTRONG12 six 6s. Could be more," Shastri tweeted. Shastri had hit six 6s in a Ranji Trophy match against Baroda while playing for Mumbai in 1984-85 season. The former India all-rounder was also in commentary box when Yuvraj Singh achieved the same feat against England in the 2007 T20 World Cup.

Sunil Gavaskar's 36 not out in the 1975 World Cup against England is remembered for all the wrong reasons. At that time, cricket fans could not make sense as to why Gavaskar played so many dot balls in his knock of 36 from 174 deliveries especially when India was chasing a target of 335 in 60 overs.

In December 2020, India coached by Shastri was bundled out for 36 in the second innings against Australia at the Adelaide Oval, giving the hosts an easy victory (by eight wickets). However, the team turned their fortunes around by winning the Border Gavaskar Trophy 2-1 against all odds.

On Sunday, when asked about his growth as a coach, Shastri had said: "When I got this role, I did not know what would be the end tale in this. I have learnt so much in the last six years, I have not experienced this in the last 35 years. Man management is of utmost importance and it is also a key as to how you understand human behaviour and how different individuals react. How someone reacts to failure and success when you need to talk to someone. This is a big group, to understand the mindset and make it work as a cohesive unit, you need to be able to understand mindsets."

Last week, Team India roared into the final of the inaugural edition of the ICC World Test Championship (WTC) following an emphatic 3-1 series win over England.

Virat Kohli's men, who defeated England in the fourth and final Test by an innings and 25 runs at the Narendra Modi Stadium, will now face New Zealand in the WTC final slated to be played from June 18 to 22, with June 23 as the reserve day in Southampton.