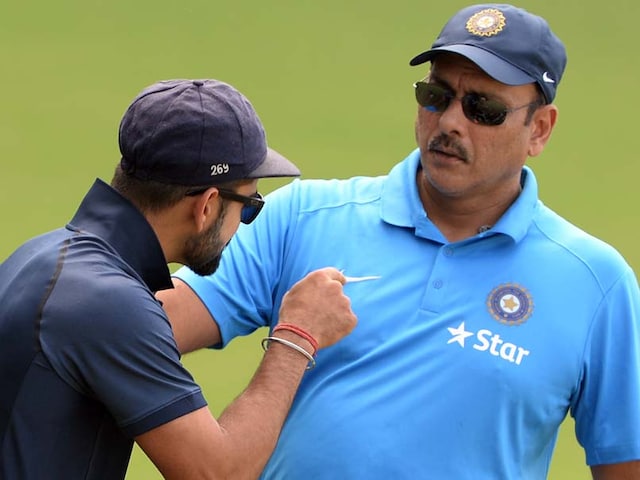 The 55-year-old former skipper sounded upbeat about the times ahead.© AFP

Newly-appointed coach Ravi Shastri on Wednesday said the current Indian cricket team, with a battery of pacers at its disposal, can go on to become the country's best-ever Test outfit in the coming years. Shastri was on Wednesday appointed coach, filling in the void left by Anil Kumble's resignation last month. The 55-year-old former skipper sounded upbeat about the times ahead.

"It can be a better Test team than any Indian team we have had. This is a team you can travel with (anywhere). There is a battery of pacers which can do well in all conditions and take 20 wickets. Their age is such that they are playing at the right time," Shastri told India Today from London.

Asked about seasoned campaigners Mahendra Singh Dhoni and Yuvraj Singh's future, Shastri said, "2019 (World Cup) is a long way to go. They are both champion cricketers. We will deal with it when the time arrives. I am just getting into the dressing room again, so I need to spend time with the captain (Kohli) and take things forward."

Shastri said he was looking forward to the challenge of coaching India.

"I have always relished a challenge and I am looking forward to my stint with India. When you are asked to open the batting in overcast conditions, it is a challenge. I am used to challenges, bring on another one," Shastri said.

Asked about his frosty relationship with Sourav Ganguly, a member of the Cricket Advisory Committee (CAC) that appointed the coach, Shastri played down the bitter spat.

"We are both former captains and there will be arguments, but we need to look at the bigger picture. He (Ganguly) asked some very good questions during my interview. We need to move on. Individuals don't matter, and we should all work in the best interest of Indian cricket. It should take the centre-stage."

Comments
Topics mentioned in this article
India Cricket Team Ravi Shastri Virat Kohli Anil Kumble Cricket
Get the latest Cricket news, check out the India cricket schedule, Cricket live score . Like us on Facebook or follow us on Twitter for more sports updates. You can also download the NDTV Cricket app for Android or iOS.