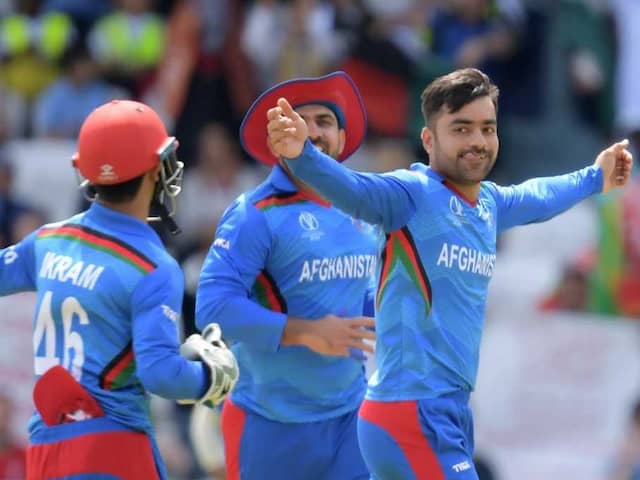 Rashid Khan has been appointed Afghanistan captain for all three formats.© AFP

The Afghan Cricket Board (ACB) named leg spinner Rashid Khan captain across all the major formats Friday, despite a disappointing World Cup for the Twenty20 sensation.  Asghar Afghan was also appointed Vice-Captain, the ACB said in the tweet announcing the decision, which gave no further details. Khan came into the World Cup as cricket's hottest property after catching the eye with his leg spinners for Afghanistan.

But the Twenty20 star, who played a leading role for many sides in franchise cricket across the globe, claimed only six wickets in nine games as the Afghans returned home without notching up a single win.

Gulbadin Naib, who skippered the team for the World Cup, defended his premier spinner after their final loss to West Indies, saying "he gives 100 percent".

The 20-year-old Rashid, who is number one in the T20 rankings, set the cricket world abuzz when he became the fastest bowler to take 100 ODI wickets, in 44 matches.

Afghanistan is one of the fairytale stories of modern sport, with cricket introduced to the war-torn country by returning refugees who had learnt about the game in camps in neighbouring Pakistan.

But their second ever World Cup was chastening, and while they headed home with more experience under their belts, there are also major questions over their batting strength and lack of quality seam bowlers.

Rashid Khan World Cup 2019 Cricket
Get the latest updates on IPL 2020, check out the IPL Schedule for 2020 and Indian Premier League (IPL) Cricket live score . Like us on Facebook or follow us on Twitter for more sports updates. You can also download the NDTV Cricket app for Android or iOS.