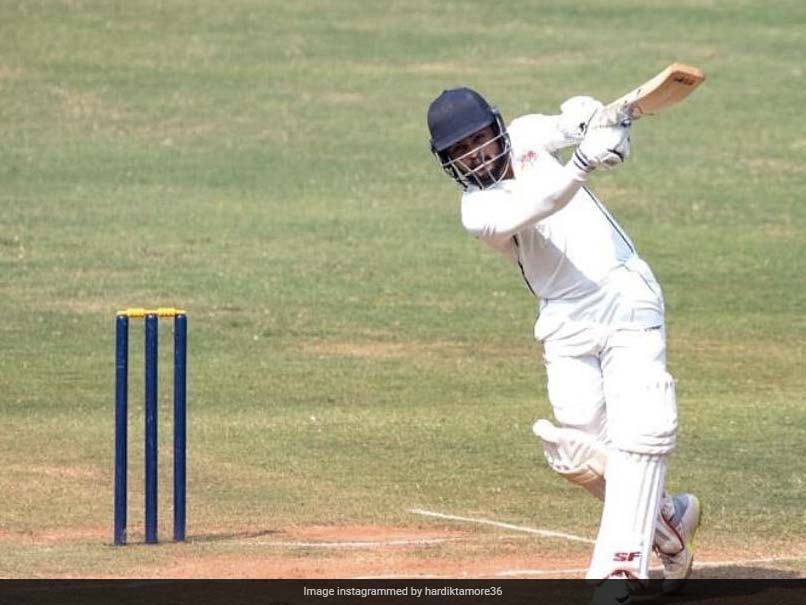 Hardik Tamore scored 115 to propel Mumbai to 393 in their first innings against UP.© Instagram

Wicket-keeper batter Hardik Tamore hogged the limelight with a stroke-filled 115 to propel Mumbai to 393 in their first innings on the second day of their Ranji Trophy semifinal against Uttar Pradesh on Wednesday. In reply, Uttar Pradesh were reeling at 25 for two at stumps, having lost opener Samarth Singh (0) and Priyam Garg (5) early. While the first day belonged to young Mumbai opener Yashasvi Jaiswal, who had hammered his second first-class hundred, it was Tamore show on Wednesday at the Just Academy ground.

Tamore, who was roped as replacement for injured Aditya Tare, reposed the faith of the team management, and along with all-rounder Shams Mulani (50) frustrated the UP attack after play commenced late due to wet outfield.

But the UP bowlers, particularly left-arm spinner Saurabh Kumar (3/107) made a remarkable comeback as Mumbai lost their last four wickets for 47 runs.

Earlier, Tamore and Mulani duo took their time to settle down and only punished the loose deliveries.

Mulani, resuming at his overnight score of 10, played the perfect second fiddle to Tamore, who notched up his second first-class hundred.

Right-handed Tamore, who resumed on unbeaten 51, anchored the innings after the domestic giants began from their overnight score of 260 for five. He and Mulani forged a crucial 113-run stand for the sixth wicket before Karan Sharma bagged his third wicket to dismiss the latter.

Tamore, in his 233-ball knock, hammered as many as 12 boundaries and one maximum, while Mulani struck five boundaries in his 50-ball knock before being caught by Madhav Kaushik.

Once Mulani fell, Tamore was devoid of partners as Tanush Kotian (22), Dhawal Kulkarni (0), Tushar Deshpande (1) failed to provide him support.

Tamore was the last man to be dismissed after he fell to Kumar.

Sharma accounted for the wickets of Jaiswal, Sarfaraz Khan (40) and Deshpande (1).

Sharma and Kumar shared seven wickets between them as UP bowled out the 41-time Ranji champions on the third session of the day.

UP did not have a good start as the pace duo of Kulkarni and Deshpande picked up a wicket each.

Opener Madhav Kaushik (11 not out) and Sharma (10 not out) were holding fort for UP at stumps. PTI NRB TRN SSC SSC

Comments
Topics mentioned in this article
MUM UP Hardik Tamore Cricket
Get the latest updates on Fifa Worldcup 2022 and check out  Fifa World Cup Schedule, Stats and Live Cricket Score. Like us on Facebook or follow us on Twitter for more sports updates. You can also download the NDTV Cricket app for Android or iOS.